Engagement with UP State Government bearing fruits (State level advocacy on FSSM)
Water Programme has been successfully engaging with Government of Uttar Pradesh to recognise the challenges associated with management of faecal sludge (proper collection, transportation, treatment and final disposal of faecal sludge and septage). In addition to capacitating four urban local bodies (Bijnor, Ramnagar, Chunar and Gangaghat) on effective city wide sanitation and preparation of City Sanitation Plans, Water Programme also organised technical training on planning of FSTP/ DWWTs and exposure visits for State Project Monitoring Unit Groups, UP Jal Nigam, RCUES, Urban Development Department to inculcate the understanding on FSSM and create a set of experts in the state. CSE is also working towards preparing a DPR for model Faecal Sludge Treatment Plant (FSTP) to demonstrate the technological intervention for FSSM.

The representation of Water Programme in UP State Ganga River Conservation Authority (SGRCA) played an instrumental role in influencing the state to take forward the FSSM in state.Recognising CSE’s expertise in FSSM, Urban Development Department invited and signed an MoU for continuous support for three years. As a first deliverable, State level guidelines on FSSM in UP were finalised which will be released by state soon. Towards showcasing the positive impacts of convergence, Water programme has been able to have NMCG on board to support FSSM work in UP.

In order to continue the advocacy and support to UP state on FSSM, water programme is settingup a State level Project Management Unit (Lucknow) and ULB level Technical Support Unit.

Capacity Building
CSE has conducted a number of trainings on decentralised solutions for wastewater & faecal sludge, preparation of CSP, city wide sanitation and exposure visits to showcase the BMPs in the area of water and wastewater management.

CSE has emerged as a capacity building/knowledge hub in the area of sustainable urban water management and has managed to cater to the demands of not only national but south Asia (Bangladesh) and Africa (South Africa, Ghana, Rwanda and Kenya), created a network of approximately 1000 practitioners in this annual year.

To roll-out the use of SFD as a decision support and advocacy tool with active participation of city stakeholders. Duration of the project (2016 to 2018): Designed as a two year project building on one year kick-start phase.

In 2014 the centre partnered with a group of institutions active in the field of excreta management to promote excreta (septage and sewage)  flow analysis to inform urban sanitation programming through the service delivery assessment tool - Shit Flow Diagrams (SFDs), developed by Water and Sanitation Programme - World Bank. The objective of phase I of initiative was development and roll out of SFDs along with service delivery context analysis by testing the approach/tools in 50 cities worldwide. CSE prepared SFDs for 11 select cities from different agro climatic zones across India. The consortium has developed a suite of tools and instruments which can be used at the local level to facilitate an analysis of urban sanitation challenges. More details on the tools and outputs of this project can be found at:http://sfd.susana.org/sfd-worldwide

CSE was invited to present learnings on waste (sewage and septage) issues to Mr Hardeep Puri, Minister for Housing and Poverty Alleviation, Govt of India.  Dt. 23/02/2018

SFDs prepared by SFD PI was used for advocacy at the meeting. SFDs of different cities across India were presented which was very useful in communicating the key issues and challenges in urban sanitation programming and inclusive, live able cities. The outcome of this meeting was that a group has been proposedby theminister with CSE as a convener to suggest ways for mainstreaming effective citywide sanitation and septage management.

In order to further understand faecal sludge management (FSM) and how NMCG can upscale work in this area in the Ganga basin states. NMCG was keen to collaborate with CSE on the following:

i) implementing cost-effective technologies in order to manage FS
ii) Drafting guidelines/policy for septage and faecal sludge management - still thinking whether to go for a uniform policy for the whole basin. NMCG also proposed to work with CSE on a possible "criteria for transportation and disposal of FS".
iii) supporting in formulating public awareness and communication strategies with regards to sanitation in schools, colleges, general public etc- Issues such as open urination & defecation, septage management were discussed.

Discussed the way forward on the Capacity building initiative of ULBs in Ganga basin cities.

CSE discussed the objectives and outcomes of the Ganga programme and further presented the SFDs of the ten selected cities. The meeting served as a medium of sensitising the officials on the subject, where quite a lot of discussion/questions were addressed regarding the need / urgency of FSM and the kind of projects/technologies we'd be looking to implement in the cities. There was a general consensus regarding the fact that central/state governments will not be able to achieve the ambitious aim of providing sewerage systems in all cities- hence the focus should be on OSS. Faecal sludge management in the target cities is going to get worse with the implementation of SBM as more toilets will be constructed, which will result in further production of faecal sludge and septage in Ganga basin towns/cities, which presses the urgency for FSM interventions. Most cities have no interventions in place for excreta management, which evident from discussions cannot be addressed by solely through sewerage- FSM can act as supplementary.  It was evident from the ten SFDs of target cities presented that most of them do not treat or safely manage faecal waste, however instead dump untreated faecal waste in the surrounding environment.  All central, state and local programmes need to “converge” and should recognise faecal waste management as a priority action area. CSE together with NMCG can work on creating innovative solutions which can strengthen FSM.

The comprehensive SFD report of Delhi, done by CSE, acts as the backbone for the action plan of monitoring committee, set up by NGT, with special reference to septage management road map. 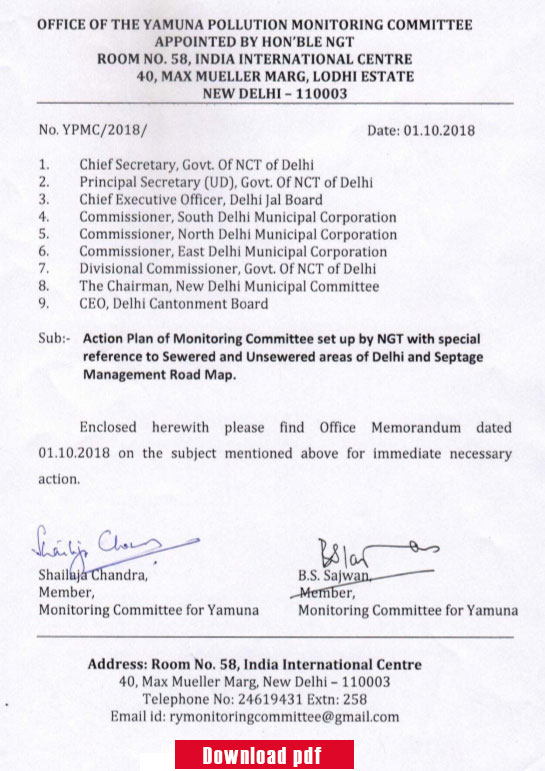