This workshop was supported by Jamsetji Tata Trust

The Forest Rights Act, 2006 is the first act in the history of India which recognises the rights of the forest dwelling tribes. To understand the act’s intricacies, implications and status of implementation, Centre for Science and Environment (CSE) and Media Unity for Freedom of Press (MUFP), Odisha organised a two-day media briefing in Bhubaneshwar, Odisha on March 4-5, 2011. About 75 journalists regional as well as from all across the country participated to understand the stature, controversies and ground realities. The panelists who encouraged the journalists to raise questions about various aspects of the act included activists, lawyers, media editors, foresters and bureaucrats  closely working in the wide arena of the act.

The workshop had a captive audience of 30 journalists, comprising of the selected fellows for the media fellowship recently announced on the same topic and media personnels working aggressively in this field.

A field trip was also organised with Odisha Jungle Manch(OJM) and Regional Centre for Development Cooperation(RCDC), Bhubaneswar to Koska village in Nayagarh district, about 90 kms away from Bhubaneshwar. 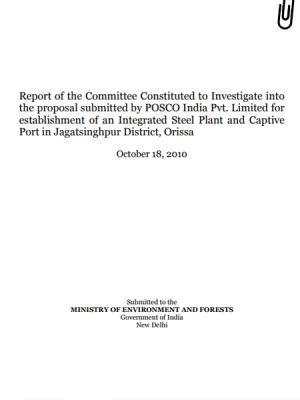 Report of The Four Member Committee for Investigation Into The Proposal Submitted by The Orissa Mining Company For Bauxite Mining in Niyamgiri August 16, 2010

Tribals beaten out of forestland

Forest rights and wrongs in Sonbhadra

Forest titles only on paper