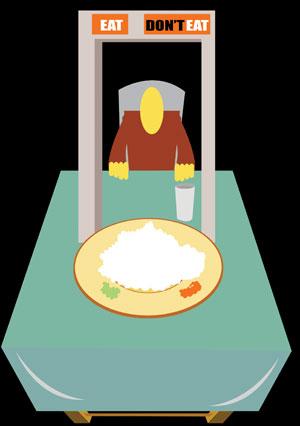 When i wrote about vegetarianism, or more precisely, why I as an Indian environmentalist would not advocate it, I had expected an emotional response. My article was meant to provoke a discussion. I believe it is time we understood the issues more clearly, with some space to agree to disagree. So, I will put aside the personal, abusive and intolerant comments I received. I will instead focus on what I learnt from the responses and see if we can find a middle way—not to agree, but to discuss, debate and dissent.

I would like to thank the readers for their detailed and often persuasive comments—in particular one from the “global environmentalist”. I only wish these were not anonymous, as it curtails an open dialogue. What is my response?

The first issue that has been raised by many who have disagreed vehemently with my position on vegetarianism is about ethics. This is a moral argument about compassion and about the absolute value of another life—you cannot kill; you cannot justify eating meat. I have no argument against this position. It is not my belief, but if it is yours, it is respected and understood.

The second issue is about the importance of a vegan diet. Some have argued this from an ethical position, others from the point of health and sustainability. I have many vegan friends—those who eat no animals or animal products—and they will tell you that their choice makes them healthy and well. But it is equally true that there are many other diets, which are balanced, nutritive, proportionate and equally good. For instance, animal milk products, particularly yogurt and ghee (clarified butter from cow milk) are considered to be very nutritive in traditional Indian food science. The Japanese swear by their fish diets. The only diet that is definitely unhealthy is the one that has excess quantity of highly processed food, including meat and junk. So, veganism is a matter of personal choice.

The third issue is how food is related to both sustainability and climate change. I have already said that the evidence on this is unequivocal. Agriculture, including meat production, is bad for climate change and uses huge amounts of natural resources. But I qualified it by saying that it was about the method of meat production—cutting down forests for grazing lands; intensive and highly “chemicalised” livestock keeping and the sheer amount of meat that is consumed and wasted. I argued instead for the symbiotic livestock economy of the Indian farmer, which is based on the use of the animal for manure, milk and then meat. It cannot be argued that this farmer, who is eking out a subsistence, is responsible for the stock of greenhouse gas emissions in the atmosphere.

But, that said, there is an issue that I needed to emphasise: the need to change food habits for sustainability. And that this does include the need to reduce—drastically in some cases—the eating of meat. It is also true that India is a large exporter of beef—buffalo meat—and so it makes money out of the bad habit of excess meat consumption. We need to push the middle classes since they consume the most to change habits of food: eat meat in moderation and waste less.

But an equally important question is: how we grow our livestock and how we process its meat? There cannot be any excuses here. We certainly need to ensure that Indian meat (and that in the rest of the world) is produced without chemicals; without the destruction of natural habitats, without cruelty to livestock; and without contributing to filth and water pollution. We, therefore, do need a discussion on “sustainable” livestock production and processing. We need to define healthy and sustainable diets. But we cannot have this debate unless we recognise that animals are an important economic asset of farmers and poor households. We cannot demonetise this asset by taking away a key value—of meat—without providing any alternatives.

Similarly, we need to clarify the rules for legal slaughterhouses and make sure that these can be enforced. Study the cost of running such meat-processing units and the best technology to reduce pollution in the neighbourhood. The laws exist for humane transportation, humane slaughter and for processing without pollution. But nothing is operational on the ground. The answer, I repeat, is not vigilantism and violence. It is about accepting that meat production exists and correcting what is wrong to ensure that it is sustainable and healthy.

The last issue is more complex. I have been asked by the readers whether my contention that “secularism” is non-negotiable also translates into saying that abhorrent cultural practices like Khap panchayats, sati or triple talaq are acceptable. Clearly not.

There is no doubt that one person’s culture could well be another person’s definition of a crime. This is why “culture” is often such an abused and contested word. But my belief is that there are certain values of equality and justice that have to be non-negotiable. For me the idea of secularism is this very idea of India which respects the equality of all. Of course, within this idea there are the rights and wrongs that an inclusive and democratic society decides. This is the discussion that we must have, open and tolerant. Not abusive. Not violent.