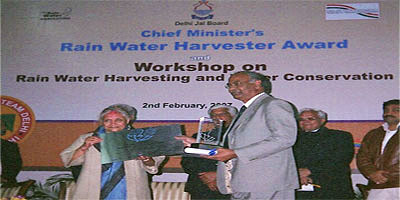 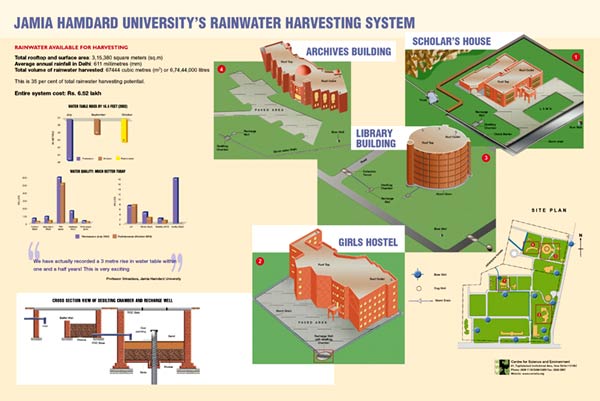 RAINWATER HARVESTING SYSTEM
Rainwater from various catchments, such as rooftop, surface runoff from open areas and runoff from the Jahanpanah Reserve Forest are harvested.

a) Rooftop rainwater harvesting at the library building

b) Rooftop rainwater harvesting at the girls' hostel

a) Surface runoff harvesting near library building
Surface runoff from the paved and unpaved areas surrounding the library is collected in two trenches located in the eastern part of the campus (near Gates 5 and 6). The runoff collected near Gate 5 is diverted into a recharge well. Similarly, the runoff from the northern side of the building is drained into an abandoned open dugwell near Gate 6.

b) Surface runoff harvesting from Jahanpanah Reserve Forest
The surface runoff from the Jahanpanah reserve forest collects in a pond from where it flows through a stormwater drain adjacent to the Scholars' House. This runoff water is channelised into a desilting chamber and then into a recharge well which measures 2m x 2m x 3m with the help of a 1m high diversion wall.
3. SURFACE RUNOFF AND ROOFTOP RAINWATER HARVESTING AT HAMDARD ARCHIVES & RESEARCH CENTRE
The rooftop rainwater and the surface runoff are collected in an open drain which runs adjacent to the building. This drain, measuring 450mm in width and 300mm in depth carries the rainwater into the desilting chamber. The silt-free water is diverted to a recharge well which has a borewell to recharge the groundwater.

The project was implemented in June 2001. The total cost for implementation of recharge structures was Rs. 6.52 lakhs. 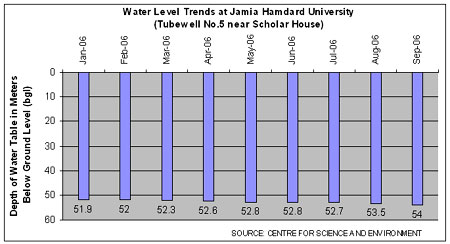 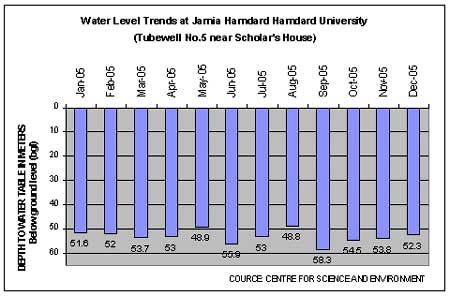 "We have actually recorded a 3-metre rise in the water table within one-and-a-half-years! This is very exciting."