CSE ( a Stockholm Water laureate – year 2005) was represented by Suresh Rohilla, Progrmmme Director – Water at SWWW 2015. The silver jubilee celebration were marked with several networking events organised by Stockholm International Water Institute including dinner with all Stockholm Water Laureates and Royal Banquet reception hosted by His and Her Majesties of Sweden -  http://www.worldwaterweek.org/the-water-man-of-india-receives-stockholm-water-prize/

The portal (www.sfd.susana.org) was launched with 8 SFD – with 5 cities (namely - Aizawl, Cuttack, Solapur, Srikakulam and Tumkur) SFD prepared by CSE Water team. The session had presentations in the beginning coupled with short time for few questions and then roundtable discussions. 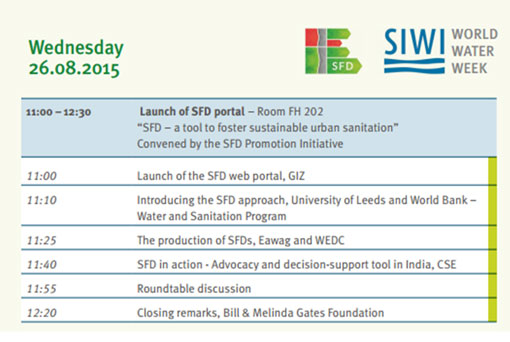 Suresh Rohilla, Programme Director CSE made a presentation on ‘SFD in action – Advocacy and decision support tool in India’

Around 120 participants attended the event and we had 10 groups discussing SFDs (the potential and limitations as an advocacy tool, data quality and availability and potential uses of SFDs).