SAVVY SOUMYA MISRA
On February 9, minister of state for environment Jairam Ramesh announced an indefinite moratorium on introducing Bt brinjal—the first genetically modified crop for mass production in India. In doing so, he overruled the Genetic Engineering Approval Committee (GEAC) that had approved commercial cultivation of the food crop on October 14, 2009.

The moratorium is applicable till the time independent scientific studies establish the safety of the product and its long term impact on human health and environment to the satisfaction of the public and the scientist community, the minister said. He pointed out there was no consensus among scientists on bio-safety protocol. States with the largest brinjal output in India like West Bengal, Bihar, Orissa and Andhra Pradesh had written to the minister to defer his decision on allowing commercial production of the crop. The Drug Controller General of India and the Indian Council of Medical Research had also recommended exhaustive food safety tests first.

“There is no hurry to introduce Bt brinjal on the pretext of food security,” Ramesh said while adding that the moratorium period should be used to operationalize an independent regulatory body as suggested by scientists and civil society organizations. “I expect the GEAC to follow up and conduct further studies and tests with appropriate protocols and laboratories,” Ramesh said.

Ramesh’s decision was preceded by public consultations in Kolkata, Bhubaneswar and five other cities in January and February. The hearings were attended by 8,000 people including farmers, scientists and activists; most of them opposed Bt brinjal. The minister had decided on holding public consultations after the GEAC decided to send its recommendations to the central government for the final decision.

The minister also announced that he intends to rename GEAC as genetic engineering appraisal committee; this would give a clear signal to private companies that “not everything they bring to the table will be approved”.

Bt brinjal has been developed by Mahyco, the Indian wing of multinational company Monsanto, in association with Tamil Nadu Agricultural University in Coimbatore and the University of Agricultural Sciences in Dharwad, Karnataka. Bt brinjal was recommended to the GEAC by Expert Committee II (see ‘Green signal for Bt brinjal’, Down To Earth, November 1-15, 2009).

The minister also called for transparency in the functioning of GEAC and more interaction with other scientists rather than going by the opinion of the developer company. But he declined to comment on the reorganizing of GEAC and the expert committee that has been accused of conflict of interest. He said he is looking into the matter.

“The decision is a step towards democratising science. This is also the time to conduct a proper review of Bt cotton, especially since there have been past instances of animals dying after consuming Bt cotton remains in the field,” said G V Ramajaneyulu, executive director of the Centre for Sustainable Agriculture in Hyderabad.

At the press conference announcing the moratorium, the environment minister also said all scientific material would be reassessed by the GEAC and scientists from India and abroad. All the tests proposed by agricultural scientist M S Swaminathan and molecular biologist P M Bhargava will be carried out, said Ramesh. These include chronic toxicity tests and multigenerational (long-term impact over a generation or two) tests.

Bhargava, the lone dissenter in the GEAC, has all along maintained that all developed countries put genetically modified crops through at least 30 tests before approving them. In India, the approval was given on the basis of just six or seven tests. “Worse, these tests were done by the developer company and not an independent laboratory,” said Bhargava. International scientists, Gilles Eric Seralini, Judy Cramen, Doug-Gurian and Jack Heineman have pointed out flaws in the recommendations of Expert Committee II and the inadequacy of tests done in India.

The minister also stressed on the strategic importance of farmers and the public retaining control over the seed industry rather than allowing private sector to control it as has happened with Bt cotton. “During the moratorium period there should be a detailed debate in the National Development Council and Parliament,” said Ramesh.

Responding to questions on unapproved Bt brinjal seeds entering the market on the sly, the minister said the states would have to take steps to safeguard against illegal seeds. Kuruganti of Kheti Virasat Mission said the minister should make the crop developer liable for any potential leakage or contamination during the period of moratorium, keeping in mind the biotech industry strategy of “contaminate first, regulate later”. She also stressed on a labelling regime for genetically modified products under the proposed Food Safety and Standards Authority. 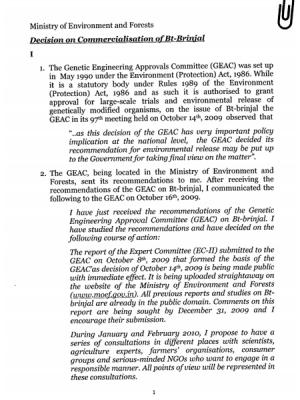 One CSE Letter to MoEF