Not Handled With Care

The healthcare sector is known to be a wellness centre and must unwittingly act as a source of further risk exposure to the healthcare staffs, patients and their families as well as the neighbourhood. Biomedical waste, the waste generated from the healthcare sector, is the biggest concern for all healthcare facilities, owing to the increasing incidents of a large number of hospital acquired infection (HAI) taking place across India.

A study by Indian Clinical Epidemiology Network (CLEN) in 2002–04shows that, out of the total annual injection usage of three–six billion, two thirds are unsafe. The situation becomes worse, when National Aids Control Organisation (NACO) data of 1993 shows that the rate of sero-prevalence of Hepatitis-B and HIV in India is 38/1,000 and 7/1,000 respectively.

Has the situation improved over the years? Even after considerable improvements in public health and hospital care, infections continue to develop in hospitalized patients. Many factors promote such infections, including decreased immunity among patients, increasing variety of medical procedures and invasive techniques creating potential new routes of infection, transmission of drug-resistant bacteria among crowded hospital populations, where poor infection control practices may facilitate transmission and, last but not least, poor waste management and sanitation conditions prevailing in hospitals.

How prepared is our healthcare sector to first reduce and then address the issue of healthcare-associated infections? Where do we stand now, 10 years after a pledge and commitment to address healthcare-associated infections in the country was made by the government of India? The country, well before 2006, had already notified the Biomedical Waste (Management and Handling) Rules of 1998, with an emphasis on safe and sound disposal of healthcare waste including used needles and syringes. But if we look at the effectiveness of such Rules on the ground, we realize that we still have a long way to go.

However, the risks and harmful effects of ill-managed medical waste do not limit themselves to a hospital setting. It puts the society at large at a risk as it pollutes the environment and human health by illegal disposal and uncontrolled burning of mixed waste, discharge of toxic chemicals and liquid effluent into water bodies, and by paving the way for illegal reuse of infected waste generating from healthcare facilities. 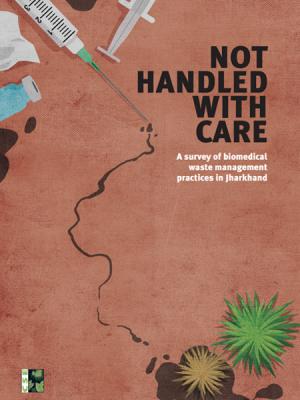