On the fast lane 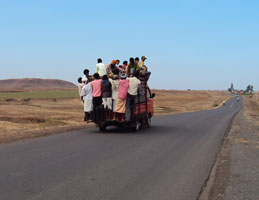 I was grounded in a village in Alirajpur, Chaktala in Sondwa block, (Jhabua District Madhya Pradesh) due to travel sickness, while my colleague went to see some good work on the wadi concept being undertaken by a local NGO and funded by NABARD. When I woke up around 6 in the evening feeling reasonably normal, I was sitting at the doorway of the house, waiting for the return of others.

During the 45 minutes or so of the time I was sitting outside, there was a constant roar of motorcycles traversing that road. Mind you, this was a pretty remote area. I was intrigued by the fact that there seemed to be a good number of motorcycles on the road. While on the way back to Jhabua town, we stopped off near a Hero Honda auto sales shop in Petlawad, to enquire about motorcycle sales. The shop manager was very upbeat about sales prospects for motorcycles in that area – he was selling about 150-200 motorcycles a month. There were 4 other shops in Petlawad, a block headquarter in Jhabua district, and all were doing brisk business. 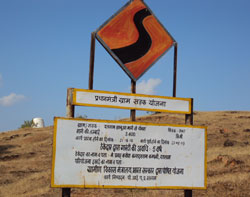 The domestic motorcycle market is nearly 11% of the global market and is growing. In India, annual sales has grown by 13 times since 1995 and constitutes nearly 80% of the two-wheeler market. In 2009-10 alone more than 10 million two wheelers were sold in the country.

What is the trigger for this? Obviously, a big factor is the improvement in economic status as well as the easy availability of bank finance. But an even bigger factor in the rural areas is the Prime Minister’s Gram Sadak Yojna (PMGSY). We definitely could not have visited the sites that we did had it not been for these rural roads. In fact, some of these rural roads were better than the highway roads, which were badly in need of repair and maintenance. The motorcycle adds significantly to connectivity in rural areas. Earlier, while we were looking at watershed work in and around Bhopal too, the motorcycle was ubiquitous. 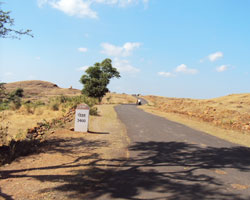 The PMSGY takes up habitations as the unit for connectivity and the dedicated funds for rural roads comes from a special cess on high-speed diesel. When the programme was launched in 2000, it was estimated that nearly 3.3 lakh habitations were unconnected. After 10 years of the programme, a third of the eligible habitations still remain unconnected. In MP, the Congress lost the elections in 2004 on the bijli, pani and sadak plank. But on an all-India basis, in 2010, MP remains as one of the laggards in ensuring rural connectivity as one of the 5 states with 55 per cent of habitations remaining unconnected.

Studies show that a rupee invested in rural roads has the potential to get back Rs. 5 as return from agricultural production. However, the original target set to connect all unconnected habitations by 2009, remains unmet.