About us | Board members | Directors | Financial reports | Annual reports | 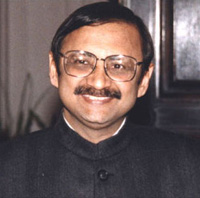 Anil Agarwal (1947-2002), the founder-director of Centre for Science and Environment, was a man of science as well as letters - a rare combination - and a visionary thinker to boot. He spent a lifetime advocating policies and practices that would allow people to manage their natural resources themselves, by learning from India's traditions and heritage.

Anil graduated as an engineer from one of India's leading engineering colleges in 1970, but gave up a promising technical career to become a science journalist. In 1974, as a science correspondent in New Delhi with Hindustan Times, one of the country's leading dailies, Anil discovered India's most evocative environmental movement -- Chipko. His story was the first reportage on a people's movement to protect the environment, in India or probably anywhere else in the developing world.

In 1980, he founded Centre for Science and Environment, one of India's first environmental NGOs to analyse and study the relationship between environment and development, and create public consciousness about the need for sustainable development. In 1982, the Centre - under his guidance -- published a pioneering Citizens' Report on the State of India's Environment, which provided the first-of-its-kind overview of the level of environmental degradation in the country and its impact on the people of India. The publication of the second Citizens' Report in 1985 caught the eye of the then Prime Minister of India, Rajiv Gandhi, who asked Anil to address his Council of Ministers, a rare invitation for an Indian writer.

Anil wrote and edited a number of other seminal publications. One of these was Towards Green Villages, a 1989 study that presented a macro-strategy for environmentally-sound rural development. In 1990, he co-authored a paper called Global Warming in an Unequal World -- the first time that the issue of equity had been raised in the context of global warming. The paper had a significant impact on the G-77 position in the negotiations leading up to the Framework Convention on Climate Change.

In 1992, Anil launched Down To Earth, the fortnightly newsmagazine on science, environment and development. Five years later, in 1997, came his exhaustive study on traditional water harvesting systems of India -- Dying Wisdom - which went on to become one of most acclaimed and respected works on the subject.

Anil was honoured with the Padma Shri and the Padma Bhushan, two of the nation's highest civilian awards, by the Government of India. Anil chaired the Environment Liaison Centre -- the world's largest network of environmental NGOs based in Nairobi (Kenya). In 1987, the United Nations Environment Programme elected him to its Global 500 Honour Roll.

Anil spent considerable time travelling to various parts of rural India to document community-based environmental regeneration efforts in villages. His reportage and writings helped Indian policy-makers understand the importance of involving people in environmental conservation and natural resource management. Anil also had a deep interest in the management of pollution, especially air pollution, and the threat that environmental change poses to public health. At the global level, he argued for equitable arrangements in dealing with the global warming problem.

Anil's biggest contribution, of course, was the creation and development of one of India's most influential and vocal environmental NGOs, Centre for Science and Environment - an institution which is internationally known and respected today for its promotion of rational approaches to environmental management based on science and social justice. Anil fell prey to cancer in 2002, but his vision and ideas live on through the Centre and a/ll that it nurtures and stands for.