People's consent a 'must' before granting green clearance to any project, say NGOs attending CSE's mega meet on environmental and forest clearances 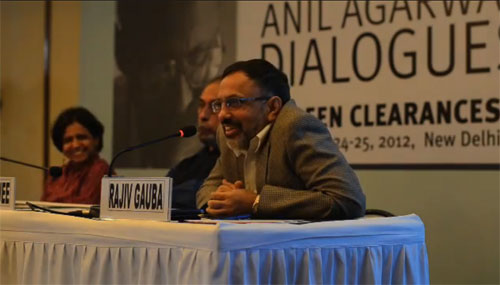 New Delhi, February 24, 2012: “In a democratic country, things are being done in an undemocratic manner.” This statement by Krishna Murthy, an anesthetist who has been at the forefront of an intense villagers’ agitation against the government and industry in distant Sompeta (Andhra Pradesh), summed up the general mood at a gathering of non-governmental organisations from across India. This gathering, one of the biggest of its kind with 150 participants from about 100 organisations, is being organised here over two days by Centre for Science and Environment (CSE).

The Anil Agarwal Dialogue, this time on the burning issue of Green Clearances, aims to bring to the fore the various issues and concerns related to environmental and forest clearances in India. Civil society activists attending the meet will now interact with senior government officials to evolve the agenda for reforms.

In Sompeta, farmers and fisherfolk are fighting a desperate battle to protect their wetlands against a coal-based thermal power project, the Nagarjuna CC power project. Murthy says the project will destroy the wetland and affect the livelihoods and water sources of the surrounding villages, and could lead to serious health problems.

Among the others attending this meet are activists like Onkar Vishwakarma and Suman Kumar Mehta from
SANGRAM, an organisation working for the empowerment of adivasis in the Mathadih, Domchanchi and Koderma in Jharkhand. One of SANGRAM’s key areas of work is against illegal stone mining.

There is also Smita Patnaik, from the Narishwar Raksha Samiti, an organisation based in Angul, Odisha. Smita and her colleagues have been fighting for forest rights, as well as the rights of women and dalits – specifically, on issues such as the threat of displacement faced by indigenous tribes, and sexual exploitation of women in mining areas. Smita is clear that coal mining companies must invest in afforestation, periphery development and treating and managing their overburden.

Says CSE director general Sunita Narain: “On one hand, industry in our country is demanding quicker clearances. On the other, for the people who have come here (the civil society activists), environmental issues are a matter of their livelihoods and livelihood security – these issues and concerns can no longer be undermined.”

Says Chandra Bhushan, CSE’s deputy director general and the head of its industry and environment programme: “How much truth is there in the contention of industry that environmental and forest clearances are hampering economic development by delaying projects? We think there is none – this Dialogue is an effort to take our findings forward. We are hoping to bring together all the stakeholders in this debate -- the government, the civil society and industry -- on one platform to discuss clearance processes, whether these processes are working, and what they aim to achieve.”

According to CSE’s analysis, green clearances are not working for the environment – clearances are being awarded despite destruction of environment and livelihoods of the people. In fact, there seem to be concerted efforts by government and industry to dilute the already existing weak processes.

Most of the NGO representatives attending the meet believe that the consent of the people is a ‘must’ before granting clearances – and therefore, the public hearing process is extremely crucial. The process, as it stands now, is a mere eyewash and a formality that actually excludes people as stakeholders, says CSE.

The other key demands of these activists include a call for cumulative impact assessments, as EIAs (environment impact assessments) of individual projects are just not working; for punishing EIA consultants who do fraudulent work; and for reforming the EIA process – most importantly, the post-clearance monitoring.

CSE researchers are of the opinion that there should be a moratorium on clearances in all the areas that have been declared critically polluted by the Central Pollution Control Board. They also say that cumulative impact assessments must be done on all major rivers before giving clearances to dams.

Says Bhushan: “The environmental and social costs must be paid. We cannot have cheap development, and that too at the cost of the poor and marginalised of the country.”

People's consent a 'must' before granting green clearance to any project, say NGOs attending CSE's mega meet on environmental and forest clearances