Bhopal, 6 July, 2012: Bhopal, built around one of the largest artificial lakes in India, has literally dug itself into the ground by polluting its main water source, the Badee Talab (Upper Lake). As a result of a total lack of planning for sewage treatment, Bhopal now finds itself having to pull in water from further away, such as the Narmada river 67 km off the city. 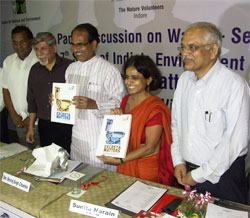 These, and other facts about how Bhopal manages its water and sewage came to light in the course of the release of a two-volume study done by New Delhi-based research and advocacy body, Centre for Science and Environment (CSE). Titled Excreta Matters, the study provides details about the water and sewage situation in urban India, with statistics and stories from 71 cities across the country. Several cities of Madhya Pradesh feature in this study.

Shivraj Singh Chauhan, chief minister of Madhya Pradesh, released the study. Sunita Narain, director general, CSE gave a presentation on the occasion, which was followed by a panel discussion on the subject.

What’s wrong with cities like Bhopal
A large percentage of the city depends on groundwater – which is severely polluted. Said Sunita Narain: “CSE’s survey reveals more than 75 per cent of groundwater samples in the city have higher-than-desirable levels of dissolved solids and alkalinity. Untreated domestic sewage is one major source, but more seriously, the highly toxic pesticides dumped in the Union Carbide plant premises have also contaminated groundwater. Pesticide levels are a whopping 561 times the prescribed limit!”

Bhopal gets around 266 million litres a day (MLD) of water and generates 285 MLD of sewage, of which just 39 MLD is treated. Most of the sewage is discharged into the Upper Lake and drains, from where they eventually find their way to the Betwa river. As a result, the water quality in the lake and river is poor and unfit for consumption.

Indore, the state’s commercial capital, fares worse. Once dependent on the Bilawali and Limbodi water tanks, as well as from the Yashwant Sagar dam, the city is now heavily dependent on the Narmada (70 km away). Any break in the pipeline or interruption in power supply deprives Indore of its water supply. The city gets over 200 MLD of water, but is heavily dependent on groundwater and generates nearly 240 MLD of sewage. Here again, the story is bleak with barely one-fourth being treated. The rest flows untreated into the Khan river, that meets the Kshipra river and pollutes it. This river is Ujjain’s main source of water.

These towns have elaborate plans to source water from the Narmada, but are consistently ignoring their sewage systems that need upgradation and maintenance. Bhopal plans to spend Rs 178 crore by 2020 to handle sewage. Indore’s proposal is to build a 245-MLD sewage treatment plant costing Rs 346 crore. Unfortunately, these are likely to be overwhelmed by the time they are ready due to urban growth.

Madhya Pradesh is exploring the public-private-partnership (PPP) model for improving urban water supply. However, this is based on a few very small pilots such as in Khandwa, where the government is paying 90 per cent while the private concessionaire is paying 10 per cent. “This is public investment for private profit, and not a true PPP model,” said Narain. The state must re-evaluate its approach to PPP before scaling it up. It can consider PPPs in sewage treatment rather than in water supply, she suggested.

CM and officials points to action on ground
Releasing the CSE report, Shivraj Singh Chauhan said Madhya Pradesh is launching a programme to reduce pollution and improve the water quality of the Narmada river by monitoring it at 200 points. The state is also expanding the ‘Jalabhishek’ programme to improve local water availability through community involvement – for this, the government proposes to redraft the master plan for Bhopal as the earlier version was found wanting with respect to environmental issues.

People have to be involved in policy making to ensure better implementation of schemes, Chauhan said. These schemes include promoting local water harvesting and conservation to improve local water availability, soil moisture and groundwater.

Chauhan also said: “There are thousands of old talaabs in the Bundelkhand region that we are going to revive by linking to rivers to augment local water availability and groundwater.”

Speaking on the occasion, the state’s principal secretary for sanitation, S P S Parihar said the government will create a state-level professionally skilled cadre for improving city sanitation services. The government would also be scaling up the sanitation programme across the state.

Excreta Matters: a case for wiser water-sewage management
Said Nitya Jacob, CSE’s programme director for water policy and advocacy: “The story line is simple, yet frightening. Cities have used up or polluted their local water resources. To quench their expanding thirst, they have started sourcing water from further and further away.” This has pushed up the cost of water, increased leakages to around 40 per cent, and sparked conflicts. Cities have to pay a heavy price for infrastructure and more to fetch this water in terms of power – electricity accounts for nearly a third of an average urban water utility’s bill.

Because of this, cities are unable to meet demand. There are stark inequities in water supply; slums account for a quarter of the urban population but get just a 20th of the water. Even those connected to the water supply system get water erratically, and of dubious quality since leaking pipes draw in pollutants.

The solution – bore a well. Cities are sucking the earth under them dry. People need water now, but water engineers draw pies in the sky with fanciful schemes to satisfy some future scenario. The result is a national groundwater crisis.

Waste is the Siamese twin of water. But our cities have not understood that where there is water, there will be waste that needs to be collected, treated and then disposed. Sewage and sewerage therefore remain one of the most neglected and flawed part of urban planning. Excreta Matters brings out the shocking lack of foresight in urban liquid waste management – how no city is fully covered by a sewage system, how sewage treatment plants are sited without any thought as to how sewage will get there, how India has the capacity to treat less than a third of its urban sewage and actually treats only a fifth, and how untreated sewage is killing our water.

Cities discharge untreated sewage into the nearest river or lake through unlined drains. This kills the receptacle. It also pollutes groundwater. Cities cannot collect and treat the sewage of all, exacerbating pollution. The treated sewage of a few is mixed with the raw sewage of the many and dumped into any convenient water body, making it a sewer or cesspool and poisoning groundwater. This is the groundwater around 40 per cent of urban Indians use without treatment – for drinking, cooking and bathing. Cities are sitting on a health bomb. They are responsible for the death of many rivers.

Excreta Matters makes a case for wise water and sewage management. Building on CSE’s decades’ long experience, it advocates augmenting, protecting and renovating local water resources to reduce the cost of water supply and improve equity. Rainwater harvesting, a much talked about and under-used approach, has to be maximised.

Said Narain: “Urban growth must emphasise water supply to all, and the collection of all sewage, and its suitable treatment to at least bathing water quality before being discharged into any river or lake. This is CSE’s agenda for sustainable and equitable urban growth.”