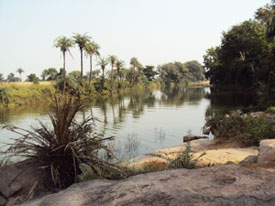 Bharar river, on which watershed work has been done.

Mukarva village had severe water problems. When their sole dugwell and far-away handpumps would dry out every summer, they would resort to collecting water from their village pond, which being open to air, would be high on bacteriological contamination. This village today has a household tap connections, sourced from a tubewell. They claim their pond to be their recharge structure, which is maintained by the fisheries department of the state government. What sped up the process here was an already aware community which desperately sought a solution. Mobilising the people and generating awareness was therefore not required. 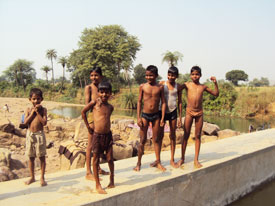 A check dam built on the river to raise groundwater levels and provide water throughout the year.

Singravan Kala, on the banks of the Bharar River has a series of check-dams for sustaining its tubewells. Here water levels have been measured and have risen significantly due to the check-dams. The convergence of watershed development and drinking water supply has been the key for Bundelkhand, a drought prone area; and the NGO responsible for this work is Haritika. While much of Haritika’s work has focussed on watershed development in the Bharar river basin, they have also worked on household water supply, and doing both of these in conjunction has proved to be immensely beneficial as household tap connections can be sustained only by insuring against falling water tables, which watershed development has assured.