JAKARTA, January 17, 2018: Rooftop solar should have a big role to play in the Indonesian energy sector. The country can benefit from its development, since grid parity for solar rooftop is on the horizon. Elaborating this point and others, Centre for Science and Environment (CSE), a New Delhi-based environmental think tank, released its report ‘A case for solar rooftop in Indonesia’ prepared in collaboration with International Solar Alliance (ISA) at a meeting organised here today. The meeting brought together a host of participants from the government, industry, academia, think-tanks and civil society organisations.

Speaking at the meeting, Priyavrat Bhati, programme director-energy and industry, CSE, elaborated: “Coal has been the mainstay of electricity supply in Indonesia and its role will increase under the country’s Energy Policy, but with prices of solar technologies reaching new lows every day, it is time Indonesia explored the opportunity that solar provides for the country.”

About 90 per cent of electricity in Indonesia is met through fossil fuels — oil, gas and coal -- that have a total capacity of 50 giga-watt (GW). Solar contributes a very small percentage of the supply today, even though Indonesia‘s renewable energy potential is a massive 717 giga-watt (GW) of which solar accounts for 74 per cent.

The CSE report elaborates how solar technology can complement the grid electricity and provide access to the remote islands. The main reasons for changing the way Indonesia is powered can be attributed to two trends – lowering of solar prices and rise of electricity tariffs.

Low cost of solar
In Indonesia, according to some studies, the cost of generation for solar is in the range of USD 0.06 and USD 0.13 per unit of electricity. And the numbers are projected to fall further given the global trend of declining cost of generation of solar. Solar sector in the country has not capitalized on this immense fall in capital costs, which is reflected in its low rate of installation.

The report concluded that introducing supportive policies – net metering for consumers, tax breaks for local manufacturers and import duty relief for installers – can further reduce cost of generation. Similar policies have been very successful in many countries

Increasing electricity tariffs
The government of Indonesia has cut subsidy support from the electricity sector, which has translated into increased electricity tariffs for consumers. Perusahaan Listrik Negara (PLN) data shows that tariff is as high as USD 0.10 per kWh for some consumer categories. For lot of consumers solar power is already lower than the tariff they are paying.

Rooftop solar offers the possibility of reliable electricity supply in cities that can act as backup at the time of power cuts and at once help to reduce consumers’ electricity bills. Solar offers an environment-friendly source of decentralized power which can be an effective means for quickly increasing energy access in remote islands without investing large sums of money on projects with long gestation periods and extending grid infrastructure.

Indonesia must consider solar a vital contributor to achieving its energy goals and set ambitious targets that reflect the country’s large solar potential. Reiterating this Bhati said “Creating a favorable climate for solar can result in significant inflows of investment, development of local manpower while reducing cost for the consumers and improving access.”

On Centre for Science and Environment
Centre for Science and Environment (CSE) is a public interest research and advocacy organisation based in New Delhi, India. Since its beginning in 1980, the organisation has, through research and its many comprehensive publications, aimed to bring about development in the Global South that is both sustainable and equitable.

CSE’s Renewable Energy team has been working in India in developing and implementing a sound renewable energy policy and programmes that can lead to large-scale deployment of renewable energy technologies in different sectors of the economy to meet the twin objective of combating climate change on one hand and achieving energy security, on the other. 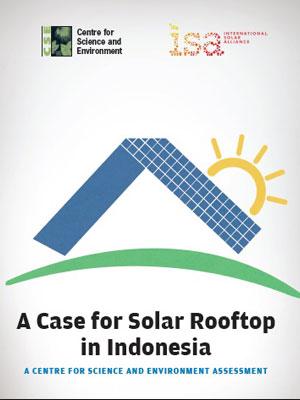 A Case for Solar Rooftop in Indonesia