Strategic and Operational Guidance on Animal and Environmental Aspects

Antimicrobial resistance has been globally recognized as an emerging threat to public health, linked with high disease and economic burden on people and nations as well as with food safety, nutrition security, livelihood and Sustainable Development Goals. It is a ‘One Health’ issue, which recognizes that health of humans, animals and environment are interconnected. It needs to be addressed through cross-sectoral coordination among multiple stakeholders.

The momentum to combat antimicrobial resistance has increased. Following the adoption of ‘Global Action Plan on Antimicrobial Resistance’ in 2015, the tripartite alliance among the World Health Organization, Food and Agriculture Organization of the United Nations and World Organization for Animal Health is supporting member states in the development of National Action Plans to be submitted by mid-2017. The issue has also received global political support at the United Nations General Assembly in September 2016.

Historically, some developed countries, particularly of the European Union, have addressed antimicrobial resistance through systematic policy and practice initiatives. The scenario is different in the developing world because of limited stakeholder awareness and resources as well as weak laws and inadequate implementation. In the global context, and more so in the case of the developing world, the human side of the problem received the most attention and the environment part has been neglected. Limited attention has been given to animal aspects.

The expert group collectively developed strategic and operational guidance on three key areas, i.e. responsible antibiotic use in food animals; surveillance of antibiotic use, residues and resistance; and environment management to contain antimicrobial resistance. The guidancer eflects what should be a part of National Action Plans of developing countries to contain emergence and spread of antimicrobial resistance in animals and the environment.

We hope that the countries consider and incorporate this guidance in their National Action Plans based on country-level scenarios in view of current status, resources, feasibility and priority. We also hope that representatives of the tripartite alliance at the national, regional and global level as well as global civil society benefit from this report and that the outcome of this report is incorporated in subsequent global guidance and country-level campaigns to address one of the biggest public health challenges. 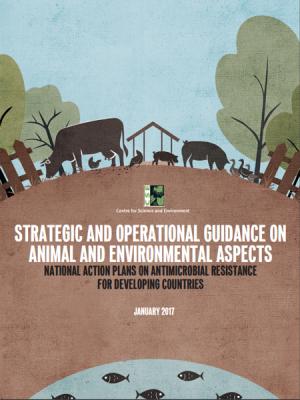