The bogey of green clearances

The environment is holding up growth and economic development. This is the common refrain in circles that matter. So when the Group of Ministers tasked to resolve the issue of coal mining in forests asked for a report on what needs to be done, it was told that the best would be to dismantle green conditions, almost completely. 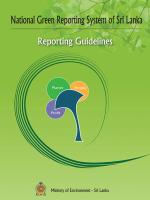 This publication provides information related to the National Green Reporting System of Sri Lanka and its reporting guidelines.