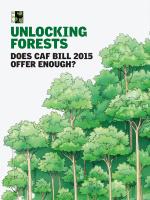 The Ministry of Environment, Forest and Climate Change (MoEF&CC) has been entrusted with preserving and improving the forest wealth of the country in the interest of its citizens and national ecological security.

When planting trees is a curse

Forests have been blacked out in the economic assessment of the country. The Economic Survey does not even list forestry as a sector, for which accounts are prepared. Instead it is lumped together with agriculture and fisheries. In other words, there are no estimates of the productivity of this sector, which encompasses over 20 per cent of the country’s land area.

REDD+: India goes all out on safeguards, Tuvalu plays spoilsport

Durban, December 8, 2011: At the deliberations on REDD+ in the meetings of the SBSTA (Subsidiary Body for Scientific and Technological Advice), India has reportedly devoted its time and energy in ensuring safeguards for the rights of indigenous communities and for conserving natural forests, giving the lie to the impression that nothing was being done on the issue. In fact, Indian negotiators point out that of the three elements under discussion in the SBSTA (safeguards, MRV and benchmarks), safeguards is the only one which has been thoroughly discussed.

We were standing at the edge of what looked like a swamp—grass and pools and streams. On one side was heavily barricaded land with high walls, barbed wires and armed security. A board read: East Coast Energy, Kakarapalli. This was where a bloody battle had taken place a few months ago. People protesting the takeover of their wetland were shot at and three lost their lives. Now the site of the 2,640 MW thermal power plant is under siege—locked and in court.

From forestry to productive forestry

My position on the need to re-position forests in development (see ‘Rethink growth with forest capital’, Down To Earth, May 16-31) has brought me a huge response. On the one hand are those who argue that functions of forests already include conservation vital to life; they need to be valued and protected. The unsaid (and often stressed) corollary is that any discussion on the need to improve productivity of forests through the involvement of people needs to be shunned. The stretched and simplistic positioning of this view is that forests and people cannot go together. 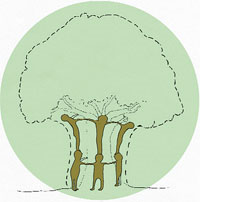 The definition is contested as the answer has immense economic implications. If bamboo is a tree or timber, it belongs to the forest department and can be auctioned to the paper and pulp industry, often at throwaway rates. If it is a grass, then it would be classified as a minor forest produce and people would have the right to cut bamboo for sale or for value addition by making furniture or baskets.