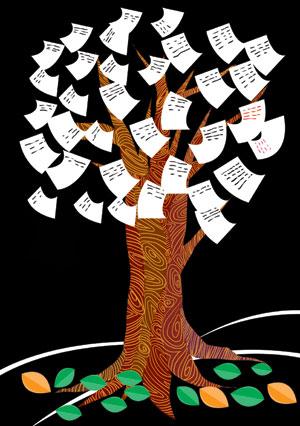 I happened to visit areas around Bilaspur in Uttar Pradesh last fortnight. In the horizon I could see fields of poplar trees, all waiting to be harvested. Farmers explained to me that the market for their tree crop had crashed. They did not know what to do. Some years ago, the price of poplar wood—used for making plywood, sports equipment and matchsticks—was a good Rs 20,000 per tonne. Now it is not more than Rs 2,000 per tonne. “Each year, we hope something will change. But now we are desperate,” they told me.

Nobody really knows why this crash has happened. As is usually the case, over-production and lack of demand have played a role. But why is there no demand for wood? Is it because we are importing so much wood that it is killing the domestic market? Is it also because huge restrictions on growing, cutting and transporting trees do not allow the domestic market to develop?

In this case, not only has the market crashed, the government is also adding salt to the wounds of tree farmers. State governments charge a transit fee per tonne of logs moved. It has ironically increased the fee even as the market price has crashed. Then the forest department charges a tax on the sales proceeds.

Given all this, farmers will think many times before they lock their land for such a long-gestation crop again. Growing and harvesting trees for productive and economic uses is once again dead in the water.

In the mid-1980s, the then prime minister, Rajiv Gandhi, had declared that he wanted to make tree plantation a peoples’ movement. The Wasteland Development Board had been set up and social forestry became the buzzword. But soon it was realised that planting trees was more than digging pits. It was about institutional mechanisms that would give people the right over the trees and a stake in management. It was around this time that Anil Agarwal and I co-authored a report on greening India called Towards Green Villages. We showed how every effort to plant trees would be defeated unless people benefited from these lands. It is important to understand that India has the highest density of livestock and no wall can keep out people’s goats.

All this built an understanding of the need to involve people in afforestation. One position was that village communities should be given rights over government forestland so that they could plant and reap benefits. But many foresters and conservationists feared that this would destroy forests; people would encroach on and takeover these lands; or simply, they could never manage the business of planting trees.

The compromise was called Joint Forest Management, a scheme where trees would be planted on forestland and the people would provide labour, protect the trees and voluntarily keep their animals out. In return, they would get usufruct rights over grass and a share of the timber revenue.

There were many problems with this approach, but the final insult came when the trees were ready for harvest. In villages where people provided years of free labour to guard and grow trees, the payment turned out to be minuscule. The forest department adopted a highly deceptive and ingenious method of calculating the revenue that would accrue to people. It deducted all the expenses of the department and then calculated the net revenue. In this way, the 20-25 per cent of the sale proceeds promised to people turned out to be a pittance. In state after state the experience is the same as the department uses convoluted formulae to calculate villagers’ share or decides that instead of cash it will provide developmental funds.

Today, India has come full circle; from the pre-1980s when the focus was on extraction to the post-2010 period when we do not want to cut any tree because we fear it will destroy forests. This fear drives forest policy, which denies people the right to ownership or real partnership in growing trees and building local economies. We now import our wood. Forest productivity is nobody’s business.

Instead, today, the Supreme Court’s directives on forest conservation, and not management, guide policy in the country. Felling trees in forest areas without a working plan is banned, and the plans are either not made or do not focus on production. Then there is ban on saw-mills around forest areas. Green felling in high mountain areas is also banned; no removals from wildlife-designated areas. The ultimate protection is that all land with trees gets classified as forests. This allows the forest department to take over these tracts of land, even though it cannot plant or take care of the land under its charge.

But what really hurts is that planting a tree is now bound up in so much restriction and red tape that it is not worth the effort. Every state has its own rules to cut, transport or market trees—even if grown on private land—that people would prefer not to grow trees at all.