The new extreme reality of floods

Change of climate in the US

Climate change has a surprising new follower: the US president. The US government has been the biggest bugbear in climate change negotiations. Since discussions began on this issue in the early 1990s, the US has stymied all efforts for an effective and fair deal. It has blocked action by arguing that countries like China and India must first do more. Worse, successive governments have even denied that the threat from a changing climate is real, let alone urgent. 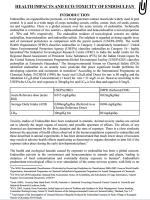 Salahuddin was selected as a fellow for CSE’s Media fellowship on Climate change for the South Asian region titled Climate Change in South Asia: Indications, Impacts and Innovations for Survival. Under the fellowship Salahuddin did a series of stories called the 'Tears of the Sunderbans' in the Daily Inquilaab.

The floods in the Himalayas have been ferocious and deadly. Fears are that the final body count could run into several thousands. There is no clear estimate of the number of villages wiped out, property destroyed, roads washed away and hydropower projects damaged in the mountain state of Uttarakhand. The mountains are bleeding and its people have been left battered, bruised and dead.

During my weekly conversation with my sister I told her about the unusual searing heat this June, the problems of power cuts and how we are coping in India. She, in turn, told me that in Washington DC, where she lives, there was a terrible storm that damaged her roof and uprooted trees in her garden. They were fortunate that they still had electricity, because most houses in the city were in the dark. She also said it was unbearably hot because the region was in the grip of an unprecedented heat wave.

It’s drought time again. Nothing new in this announcement. Each year, first we have crippling droughts between December and June, and then devastating floods in the next few months. It’s a cycle of despair, which is more or less predictable. But this is not an inevitable cycle of nature we must live with. These droughts and floods are man-made, caused by deliberate neglect and designed failure of the way we manage water and land. What we must note with concern is that these “natural” disasters are growing in intensity and ferocity.

Little harvest, less land to till

By: Tashi Morup Leh farmers face losses as flood debris rendered land uncultivable Two months after a cloudburst and floods destroyed their crops and land, hundreds of farmers in Leh are struggling to make a living. Farmlands in the district of Ladakh are covered with thick layers of dried mud and boulders. This has led many Ladakhi family suffer as their source of livelihood has shattered. It has taken Leh several decades back.