IEC and its need in the programme-

As per the agreementwith Chunar Nagar PalikaParishad (CNPP),Centre for Science and Environment (CSE) supporting the urban local body as technical and knowledge partner for implementing the Faecal Sludge &Septage Management (FSSM) for improved city-wide sanitation. In addition to this partnership, CSE got the mandate to support this 1st NMCG funded FSTP project in Uttar Pradesh as its technical partner. The FSTP at present is in operational state and is currently safely treating faecal sludge of the city.

In order to spread the awareness on FSSM and safe sanitation practices among urban community in Chunar, IEC campaign Phase II has been planned by CSE with support from the ULB. Various IEC activities have been conducted to promote regular & safe disposal of FS & awareness generation amongst urban community of Chunar. As per the plan for the IEC campaign Phase II, the following activities have been organized by TSU Chunar to bring participation of the various stakeholders in the city.

Under the ongoing IEC campaign in Chunar, a total of 115 young students of Glenhill School of Chunar & Sanskrit Mahavidyalaya, Chunar Mirzapur have been oriented on WASH and Malasur, the demon formed from faecal sludge which is unsafely releasing from septic tanks and their implications when mismanaged. Students were encouraged for their individual contribution in preventing water contamination from Malasur and contributing for making clean, healthy and ideal Chunar for all.

Ward wise IEC campaign has been launched by EO, Chunar in the ward DarghaSarif of Chunar to promote safe sanitation practices in the city and encourage effective FSSM in the city. Various stakeholders.

Objectives of the IEC campaign 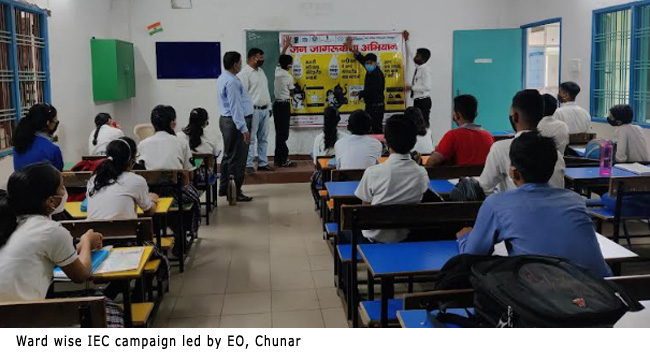