In an effort towards the advocacy for sustainable citywide Faecal Sludge Management and technical support to their focus towns in Uttar Pradesh i.e. Bijnor and Chunar, CSE proposed an IEC campaign ‘MalAsur1/’ in the 7th City Sanitation Task Force (CSTF) meetings of both the towns.  CSE raised the issue of improper emptying and transport of faecal sludge in the ULBs and the need to spread awareness around the issue with a corresponding change in knowledge, attitude and behavior among populations to adopt correct FSM practices. These campaigns are therefore important to shift attitudes among populations to adopt correct FSM practices.

1. Containment: Build the right containment structure for your toilet
2. Emptying: Desludge once in 3 years through a licensed operator
3. Disposal: Check with the desludger where the faecal sludge will be disposed and report indiscriminate dumping 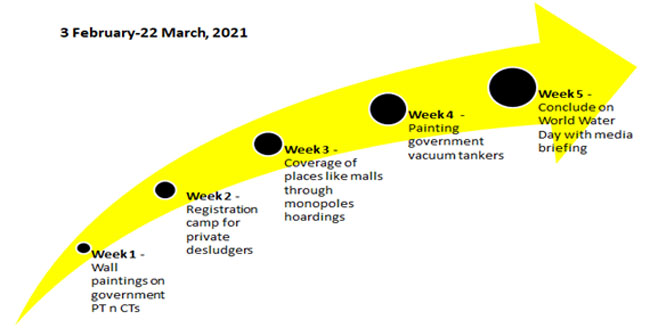