Where is the lake?

The Bellandur Lake is in the news nowadays because the Lake which once acted as a major source of water to the city of Bangalore, Karnataka has now been converted to a sewage drain completely. The dumping started in the late 90’s when the people of the region started depending on river Cauvery for their water requirements. 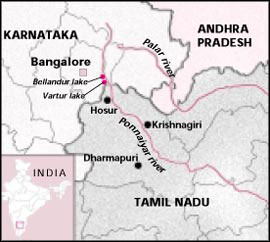 Although the government had upgraded the existing Sewage Treatment Plant (STP) after the Public Interest Litigation (PIL) of the Bellandur gram panchayat in 1996, yet the STP was unable to treat the sewage completely. The untreated sewage started to flow into the lake. This not only polluted the lake water but also added contaminants to the water recharged below the ground. Today the vegetable growing around the lake tastes differently and there is a rapid decline of fishes in the lake. Everyone agrees that it is impossible to clean the lake. The builders of the new apartments developed on the encroached lake beds invest crores of rupees to bring water through piped supply. The local residents who depend still on the lake water suffer skin and respiratory diseases. Presently the state of the lake is in very poor state and the PIL is either lying pending in the court or there is no response of the High court directives.