Agra is growing, but for how long?

CSE's 7th State of India Environment Report, Excreta Matters, was released, debated and discussed in Agra at seminar held at the Karyakaari sabha kaksh (Agra Nagar Nigam) on May 5, 2012. The meet was attended by 50 people, including the Agra District Collector Ajay Chauhan, Member of Parliament from Agra Ram Shankar, the general managers of the Uttar Pradesh Jal Sansthan and UP Jal Nigam, the regional officer of UP Pollution Control Board, as well as civil society representatives and concerned citizens. 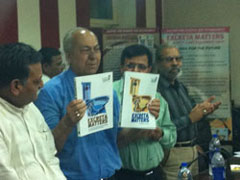 The report, which provides a detailed analysis of the water-sewage profile of 71 cities across India, including Agra, was released by Shri D K Joshi, petitioner and member of Supreme Court Monitoring Committee on water supply, drainage and sewerage in Agra.

Those present felt had the sanctioned money for the Yamuna River clean-up been spent well, the quality of the river Yamuna would have improved. Mr. Joshi said although we are endowed with natural resources, our actions or development paradigms are ruining each cities local sources of water, be it rivers, lakes, ponds or dug wells. He stressed the need to develop and maintain local water systems, briefing the gathering on a 307 ha lake, 20 km from Agra known as Keetham as an example. The British, he said, signed an annual agreement in 1922 for ` 1,000 as the annual charge to the city corporation for supply of water to Agra. “Why isn't this considered as a viable source, instead of spending thousands of crores to pipe Ganga water from a distance?” Joshi questioned the authorities at the meeting, saying they were interested in spending more money, to make more money.

During the discussion it emerged the quality of the Yamuna River water at Agra had deteriorated in quality. Its biological oxygen demand has risen to 30 mg/l now from 6.6mg/l two decades ago even though Rs. 400 crores had been spent as part of river clean-up programmes. This was not disputed by any of the city authorities present.

They have not, apparently, learnt any different. Instead of remediating, and preventing more than one hundred local water systems (talaabs) from contamination and encroachment, the city is seeking to source water from a distance of 140 km from the upper Ganga canal. The project remains in the pipeline since 2005, and has reportedly escalated from ` 345 crore to more than ` 3,000 crore today. This is also one of main points of Excreta Matters; cities are spending more and more to get water from increasingly distant sources. 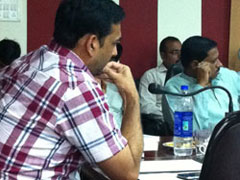 Collector and MP (Agra) at the meet

The district collector agreed that no improvements had been made to Yamuna River’s water quality. He steered the discussion away from the blame game, towards what could be done to improve the situation. Mr. Ram Shanker said that in five years’ time, there may be an even bigger crisis on hand. Even today, nearly three-fourths of the population of Agra, who cannot afford tankers, is facing a major problem of water for domestic use.  Groundwater too, declining at two metres each year, is khaara (brackish) in many parts of the city.

The participants agreed that until now the agenda in the city has been restricted to the Taj Mahal and ancillary projects dealing with aesthetics and beautification. Preparing a comprehensive plan was called for by the collector who said that the present Government is keen on improving services in Agra. Despite eight rivers in the district, Agra faces a recurrent water problem, that is because of mismanagement.

Mr. Chauhan asked participants to suggest if the proposed Taj Barrage to augment Agra’s water availability would solve the situation. However, the premise that cities should not look far afield for water did not find resonance since several participants felt piping water from the Chambal River would be one solution to the city’s water woes. The statement that Agra discharges sewage into the Yamuna River upstream of a water treatment plant also did not shock the authorities present; instead they believed the interceptor sewer project under JNNURM would set this right.

Mr. Raman, member of the Supreme Court monitoring committee, provided updated figures for Agra’s water supply. The city is to get 140 cusecs of water from the Tehri dam, the groundwater levels are falling by 2 metres a year and a new sewage treatment plant with a capacity of 160 MLD has been sanctioned.