The Gare Palma Coal Sub Block IV/6 was allotted jointly to M/s Jindal Steel & Power Limited & M/s Nalwa Sponge Iron Limited by the Ministry of Coal on January 13, 2006 to meet the coal-requirement of their respective Sponge Iron Plants situated at distances of 45 km and 25 km from the Coal Block at Raigarh & Taraimal respectively.

The public hearing for the project was conducted on January 05, 2008 (Read story: EIA for Jindal coal mine in Chhattisgarh ignores threats) and Environmental Clearance was accorded to this project on May 18, 2009 by the Ministry of Environment & Forest (MOEF) vide their letter no J-11015/110/2007-IA.II (M). The Environmental Clearance was challenged in the National Green Tribunal (NGT) in June 2009. (Read story: Green nod to Jindal mine nixed).  The NGT bench, comprising of Justice C V Ramulu and R Nagendran, said, “It was a mockery of public hearing and the procedure required to be followed.”

The NGT, in its judgment dated April 20, 2012 set aside the Environment Clearance with a direction to re-conduct the public hearing.

Ministry of Environment and Forests (MoEF) directed the Chhattisgarh Environment Conservation Board (CECB) on May 24, 2012 to re-conduct the public hearing. The Expert Appraisal Committee (Thermal & Coal Mining), after scrutiny of application of M/s Jindal Steel & Power Ltd. issued the Terms of Reference (TORs) vide their letter no. J-11015/214/2012IA.II (M) dated October 19, 2012 for Gare IV/6 coal block. The next public hearing was due on September 25, 2013. (Read Story: Public hearing for Jindal coal project in Raigarh held amid protests)

The present EIA is not a fresh report, but has been updated for the upcoming public hearing.

The EIA is prepared by Min Mec Consultancy Pvt. Ltd., which is not accredited with the Quality Council of India as an EIA consultant, as on September 5, 2013.

CSE has done an analysis of the new EIA report based on community requests.

For More information over the Project & Public Hearing Videos 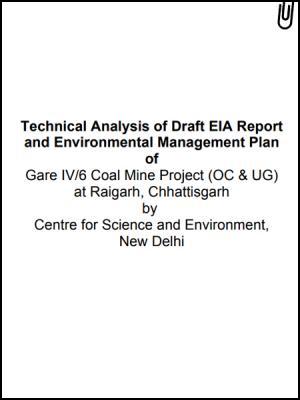