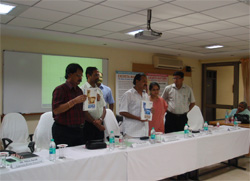 Odish's capital of Bhubaneshwar lacks any sewage treatment system, and ends up polluting its adjoining rivers, lakes and ground water, says the report of the Centre for Science and Environment (CSE) called Excreta Matters. This is serious since between 19 and 30 per cent of the city's population depends on groundwater for domestic use.

Releasing the report, Odisha's Minister for Environment Mr. Debi Prasad Mishra said sewage management is a crucial part of effective urban planning. â€œIgnoring sewage is leading to severe pollution of the rivers flowing near Bhubaneswar such as the Kuakhal, Bhargavi and Daya rivers, as well as the Chilika Lake.

The publication provides first-hand information on water-sewage across India. It has several suggestions on using water in a sustainable manner, recharging groundwater and rainwater harvesting. The Minister said a holistic approach is needed for Bhubaneswar based on low-cost or appropriate technology incorporating traditional knowledge to manage water and sewage. "We want to prepare a road map for sustainable management of water in the city and look forward to working with the agencies present (at the workshop)".

Cities needs better water management planning, said Prof Kajri Mishra of Urban Planning, Xavier Institute of Management Bhubaneswar. The authorities are largely ignorant of water-sewage, and there is a shortage of city planners; against a need for 200 people, the government has only 12. Further to this, as added by Dr. Piyush Ranjan Rout that â€œWe need to begin with an analysis of the current situation and then work out a strategy for the future. Bhubaneswar started as a planned city but expanded rapidly, outstripping the vision of its planners. However, there is still room to improve the city through better planning.â€

Bhubaneswar loses 45 per cent of water through the supply system, said Mr. Dilip Singh, Special Secretary for Housing and Urban Development. The city needs to meter all its water connections and penalize rule breakers. Unplanned construction is also to blame for the current mess in providing civic amenities in the city.

Participants in the workshop called for better urban planning, monitoring groundwater, ward-wise water testing, mandating rainwater harvesting and solid waste management. The informal sector can be used in a more organized way for improving solid waste management, that will also reduce the quantum of solids entering water ways. They felt water quality is a serious problem in the city as nearly 40 per cent of children get jaundice from drinking contaminated water.

Excreta Matters points out Bhubaneswar has an excess of water supply on paper. In reality, high transmission losses and a small distribution system ensured that supply was highly inequitable. The water supply network covers only 65 per cent of the cityâ€™s area. Because of this piquant situation, the water treatment plants work at low capacity. 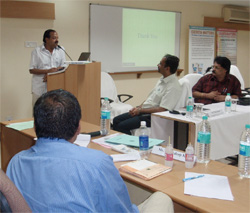 On the other hand, it has no sewage treatment facilities. Sewage, said Nitya Jacob, director of CSEâ€™s water programme, is discharged into drains that flow through oxidation ponds or aeration lagoons. These do not function, but merely act as flow-through systems. Therefore, an estimated 173 million litres a day (MLD) of untreated sewage flows into the rivers near the city. The finances of the cityâ€™s water supply agency, the Publich Health Engineering Organisation, are extremely precarious. It recovers only a third of its cost on water supply, and has no charges for sewage treatment. This has implications for O&M and future sustainabliyt.

Therefore, the city has to prepare a water master plan that includes expansion and improvement of its water supply, identification and protection of lakes and surface bodies to maximize local water resources and take stock of its groundwater resources to manage them sustainably. Water losses have to be brought down to an acceptable limit of 15 per cent. Community involvement is a must to improve the condition of local water bodies.

Only a third of the cityâ€™s households have a sewage connection while the rest use septic tanks. The sewage system has to be upgraded through expansion and installation of sewage treatment plants. However, Jacob suggested starting sewage treatment iimmediately through bio-remediation and constructed wetlands to make the oxidation ponds and aeration lagoons more effective.

Odisha has an urban sanitation strategy that envisages the development of citywide sanitation plans and integration of all aspects of sanitation in an effective way with special emphasis on slums. The aims are to improve public health and environmental standards of the city, universal access to toilets, effective disposal of liquid and solid waste and strengthening institutionnal capacities, said RanjanMalick, water sanitation and hygiene consultant. This ensures minimizing solid and liquid waste, as well as the generation of sewage.