Catching water where it falls 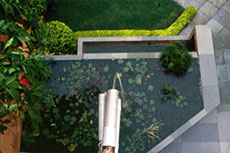 The total area of the Centre for Science and Environment (CSE) building is 1,000 sq. m. The office gets most of its water supply from groundwater through its borewell. The rainwaterwater harvesting system was installed in the building in June 1999.

Out of this, at least 3,66,600 litres (60% of total) can be harvested annually.This harvested water amounts to approximately 1000 litres/day. 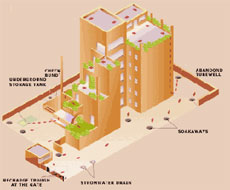 a. Recharging of abandoned borewell

Rainwater from the rear portion of the terrace is led through a vertical drainpipe to the 45 m deep abandoned borewell. 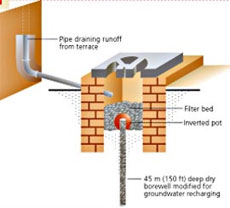 An aluminum grating prevents debris from entering the borewell. The borewell and the sump on top are filled with filter media of brick-bats to trap debris.

Thirteen soakaways have been constructed around the building. A soakaway is a vertical shaft of 150 mm (6”) diameter bored in the ground to a depth of 30 feet and cased with a PVC pipe.

The mouth of the shaft is covered with an inverted earthen pot with a small hole to prevent the entry of debris into the shaft.

A small sump is constructed around the top of the shaft, which is filled with with a filter media of brickbats to prevent entry of debris.

A perforated RCC cover is placed on top of sump to allow the entry of rainfall runoff. 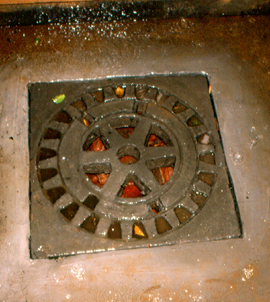 c. Rainwater storage tank
The front facade of the building has terraces projecting out at various floors. The rainwater drainpipes from all terraces are connected in series so that the runoff from these terraces falls into the pond in the front of the building. When this pond overflows, water flows to the underground tank of 8,500 litre capacity. Water from this rainwater storage tank is used for low-quality uses like gardening. 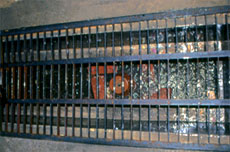 Openings of the municipal stormwater drains within the campus area have been raised slightly above the ground level, so that rainwater does not drain away.