Some of the worst cases of outdoor air pollution are found in Asian cities. Although cities like Delhi and Dhaka have reported drop in air pollution levels but more recent information shows reversal of trend in few cities as levels of key pollutants take a u-turn. Even some medium and small-sized cities are also witnessing aphenomenal spurt in pollution as severe as any mega city.

This has called for renewed action in new areas where the action have been minimal, for instance vehicle technology / fuel quality improvement has been implemented in many Asian cities, but off late the cities are also realizing that growing number of vehicles is undermining the gains as cities are caught in a gridlock of cars, ubiquitous two wheeler and three wheelers and various types of non-motorised vehicles.

The Asian streets give a glimpse of transition from non-motorised to motorization and marginalization of green modes of commuting like walking, cycling and rickshaws. People are exposed to vehicular fumes – which largely remains unmonitored – but still these cities have commuting pattern that are different from western mobility patterns which are heavily depended on cars. Asian cities can still take a alternative path which provides mobility to all with lower pollution and energy impacts. South Asia being a largest integrated region in the world can set an example of the alternate path. South Asian economies have achieved impressive rates of economic growth since the 1980s. India, Pakistan, Bangladesh, and Sri Lanka have grown more rapidly since 1980 than any other region except East Asia.

This region has enormous opportunity to build their economies but not get caught in the spiral to toxic fumes, wasteful energy use in transport and gridlocked streets. 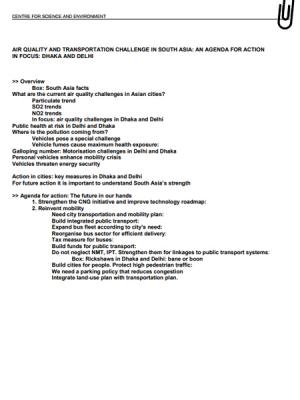