The oil price surge has caught the market watchers and media agog. Expert viewswar on price insulation, energy security and our vulnerability. But oil price peaks do not make lasting impression on the public memory as the Government either makes generous cuts in petrol and diesel prices and taxes or caps its increase to take the heat off the price rage. Consumers are thus insulated at a huge cost. Vehicle industry is not pushed to innovate to ensure substantial fuel savings through efficiency gains. There are no checks on them as they continue to drift towards bigger and more powerful cars.

Price shocks have not provoked policies to prevent the oil guzzle for a more energy secure and low carbon future.

Transport sector is the largest user of oil – nearly half of the total consumption, andis poised to make India’s oil security even more precarious. Asian Development Bank projects that the total fuel consumption of on-road vehicles in India in 2035 can be six times over that of 2005 level. Explosive growth in personal vehicles and steady shift of freight transport from railways to roadways will incite ravenousappetite for energy. The Integrated Energy Policy 2006 estimates that 50 percent improvement in fuel efficiency can help save nearly 86 million tonnes of fuel by 2030-31, which at current prices amount to more than US $36 billion. Petroleum Conservation Research Association further interprets this to suggest that this amounts to 65 per cent of total current consumption and in terms of carbon dioxide emissions reduction it is equal to removing 7 million of today’s four wheeled vehicles.

The Indian car industry however, is celebrating the record sales figures. And the Automotive Mission Plan that aims to expand the auto hub in India does not link the new investments with stringent fuel efficient and clean emissions targets. It is indefensible that the government should be so willing to forego public revenue to support car industry that has no legal obligation to meet fuel efficiency standards. How fuel efficient, are our cars? Nobody knows. The fuel economy level of Indian car models is confidential. There is no official policy to get car makers to publish the fuel economy levels of models they make. The valued Indian customer relies on anecdotal information, the car-owner grapevine, car companies’ self-proclamations or data the niche car magazines publish. There is no official certification data to back the claim of the car companies. 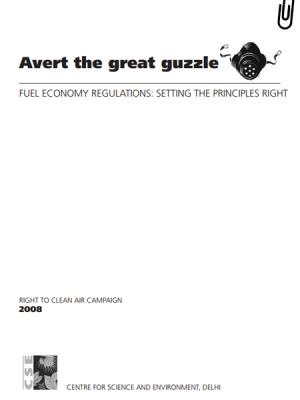