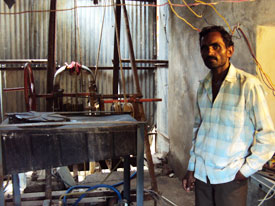 A chlorinator has been installed for basic disinfection of the water collected in the watershed. a person has been appointed to manage the system.

“Mahukheda ki ghati, mare raand, jeevit mati” goes a local saying here. It implies “in the valley of Mahukheda, women perish and men prosper”. Habiting the hilly regions of Dewas district in Madhya Pradesh, this village has always been water-poor, burdening its women with the daily chore of fetching water over long distances and undulating terrains. “So many men in our village have died bachelors, no other village wanted to marry its daughters here, looking at their plight”, a group of elderly men explained. “When the MLA Mishti Lal Kangwal’s wife came to this village and went to fetch water with the women here, she realised their daily hardship and convinced her husband to improve the water situation for us”, added another member of this group.

Today this village, with a population of 3,400 (475 families), is a proud owner of a successful community run piped water supply scheme. Nearly every household in Mahukheda has a tap connection, thereby relieving women of a massive burden and men of their stigmatised bachelorhood. Water is brought to these taps from a 70,000 litre overhead tank, made on the private land of a villager, who decided to donate his land for this purpose, to the panchayat. Water is pumped to this tank from a sumpwell, half a kilometre away. This sump is filled with water coming from the recharge structures that have been constructed 3 kms away, under the watershed work done in this village on a seasonal stream, Pakhalia Khal. Check dams, dykes, percolations tanks, contour trenches and revival of old ponds are some of the works undertaken by the watershed committee. An excellent example of convergence of various government schemes and departments, this water supply initiative has converged works of PHED, National Rural Employment Guarantee Act, Rajiv Gandhi Watershed Mission, Central Ground Water Board and the Total Sanitation Campaign.

“Even though we had 14 public standposts installed in our village in 1962, we had a perpetual water shortage as they would run dry in the summer and fights would brew around them” recalled Shiv Narayan Chowdhary, the secretary of their Village Water and Sanitation Committee (VWSC). It was when the panchayat heard about the work done in Ralegan Siddhi, Maharashtra, by Anna Hazare, that they felt inspired to visit it, learn and replicate the model here. Having done their homework, the panchayat put forth a proposal of a community run but PHED installed piped water scheme with assured sustainability by way of watershed development, to the PHED in 2004. When given a positive response from the PHED, they formed the VWSC as well as the Watershed Committee and began working on the scheme, which was completed in 2007. The total cost of the scheme was Rs 23.63 lakhs of which the community contributed Rs 2.38 lakhs. Getting communities to contribute 10 per cent of the cost has proven to be a tough task in most cases, but Mahukheda was an exception with people coming out and paying their share with cash and labour. According to Rajesh Joshi, Executive Engineer, PHED Dewas, “Once the community realises the benefit of the scheme, they set their own rules for involvement. The role of the department is then to design a scheme which fulfils their aspirations and meets the quality norms”. 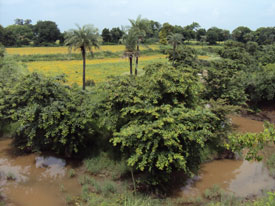 watershed work has ensured all year round water in the seasonal streams and has led to afforestation as well.

“It was a step by step process and we learnt on the job. We didn't have all answers and solutions right from the beginning. For example, initially we provided piped connections in homes without taps, so when the water would flow in them, there was no way of stopping it and had to be collected. But many families didn’t need that much water and it was leading to much wastage. We then installed taps in all the connections. This way, we learnt from many mistakes we made on the way” said Anirudh Singh Pawar, head of the Watershed Committee, also a lawyer by profession.

The big investments were made by the PHED while the VWSC took care of the O & M as well as electricity bills, using the monthly payments made by each member of the village and the initial contribution made by each family. Unlike other villages, the monthly contribution here is not per family but per person (Rs.5) and per connection (Rs.10). Thus, those with 2 connections and more family members are not subsidised by those with small families and just 1 connection. Those with animal sheds pay an extra Rs.40/month for a separate connection for the shed. The village has been divided into 12 sectors for laying out the pipelines and each sector is provided water for 40 minutes/day, at a different time. Public standposts have been removed as it was widely held that they are unhygienic and cause filth around them.

Quality control is maintained by the anganwadi worker, Lachmi, who is well versed with the water testing kit and does monthly checks to ensure good quality. A chlorinator has been installed at the sumpwell for basic disinfection. The cost of electricity comes to Rs 4,000 per month and the pump operator is paid Rs 2,500 per month. Based on the contribution received from the households and after paying the electricity bills and operator's salary, the VWSC has a balance of Rs 1.97 lakhs in its account with an yearly saving to the tune of Rs 23,000. Financial sustainability isn’t therefore, a problem.

Ensuring community support is the tricky part which PHED usually finds challenging. How does one involve the villagers for successful maintenance of the system? Unless community members don’t feel a sense of ownership towards their amenities, they will not be interested to maintain it. This sense of ownership comes either through financial contribution, labour contribution and participation in decision making. In Mahukheda, all three have played important roles and have therefore successfully sustained community involvement to run the scheme.

What sets Mahukheda apart from the rest is exactly this – a highly mobilised community without any external agency playing the role of a catalyst. Typically, there are civil society organisations that intervene to bring about change by mobilising the community and playing mediators between the village and the government. However, people in Mahukheda, out of sheer need and a sense of urgency, rose to the occasion to take matters in their own hands. The USP of this village is the dynamic leadership displayed by the panchayat which is the real catalyst here.