For region-specific press releases for

New Delhi, June 7, 2018: “Keeping our cities clean by only collecting and disposing wastes is not sufficient. What is required is source-segregation, proper treatment, recycle and reuse of the waste. Zero landfill should be the goal of municipal waste management in India,” said Chandra Bhushan, deputy director general, Centre for Science and Environment (CSE), while announcing the awards for most efficient management and segregation of waste by Indian cities which are members of the ‘Forum of Cities that Segregate’.

CSE has been working with cities to promote and implement source-segregation and decentralized model of waste management. To advance this work and to create a movement in the country on source-segregation, CSE had launched the ‘Forum of Cities that Segregate’ on December12, 2017. The Forum now has 26 members, including cities like Indore, Thiruvananthapuram, Mysuru, Muzaffarpur and some municipal corporations of Delhi NCR (such as SDMC, EDMC and Gurugram).

CSE released here today the 2017-18 assessment report of the performance of 20 of these 26 Forum cities. The cities were assessed based on their performance in 2017-18. The parameters included segregation at source, collection, transportation, waste processing, adoption of decentralised systems, the inclusion of informal sector and the enforcement of SWM bye-laws and Plastic Waste Management Rules, 2016. Based on the findings of the assessment report, the best performers were selected and the Leaves Awards conferred on them.

“Under this Forum, 26 cities from 14 states have come together to ensure that they adopt 100 per cent source segregation and become the pioneers of waste management in the country.Our objective through this assessment is to work with cities and help them perform better and continue to reinvent their waste management systems,” said Bhushan.

The award winners and the findings of the assessment report
“It is clear in our assessment that smaller cities have been more successful in implementing source-segregation compared to bigger cities. They have alsobeen innovative in their approach and hence have performed well” said Swati Singh Sambyal, programme manager, waste management unit, CSE.

Recently, the Union Ministry of Housing and Urban Affairs had released its SwachhSurvekshan results 2018 for 52 cities.Commenting on it, Bhushan said: “A majority of the cities announced in Survekshan 2018 are ‘visibly’ clean,but many do not have an appropriate system for processing and disposal of waste. They continue to collectwaste and dumpit in under-functional processing sites, landfills or dumpsites.”

He added: “Cities must shift their focus towards creating end-to-end systems to support segregation with effective processing and disposal mechanisms. Only then will such ranking systems work in changing the solid waste management scenario in the country.” 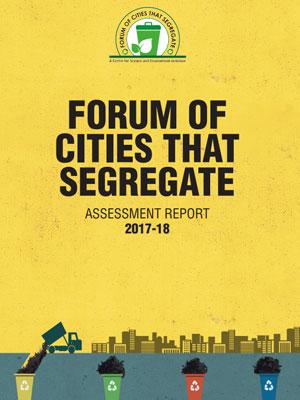 Forum of Cities that Segregate

Forum of cities that segregate