CSE releases its report on profit sharing in mining

Mining companies must share profits with local communities: latest CSE report comes out in support of proposal to share 26 per cent net profits

Bhubaneswar, June 24, 2011: Mining companies and industry in general have been opposing the government’s recent proposal to set aside 26 per cent of their net profits, to be shared with local communities. Their contention is that this provision, if passed by Parliament, would drastically dent their profitability. A recent analysis by New Delhi-based research and advocacy body, Centre for Science and Environment (CSE), proves them wrong.

The Central government has come out with a draft Mines and Minerals (Development and Regulation) bill, 2010 (MMDR bill) to replace the 1957 Act. The draft bill which has been vetted by a GoM, includes this provision of sharing benefits. The CSE analysis comes out in strong support of this proposal, and clearly establishes how timely and necessary this provision is.

Speaking on the occasion, Chandra Bhushan, deputy director general of CSE said: "It is now well recognised across the world – including in India -- that wealth generated by the mining sector comes at a substantial development cost, along with environmental damages and economic exclusion of the marginalised. In fact, the major mining districts of India are among its poorest and most polluted."

He added: "The government’s proposal to share the benefits of mining with local people is an important step ahead in building an inclusive growth model. It is also in line with the best practices being followed in the world. The principles are not new and many mineral-rich countries have been following it for years without impacting the genuine profitability of mining companies."

Profit sharing a global practice
To break this resource curse, a number of countries across the globe have incorporated the provision of benefit sharing in their mining legislations to enable local communities to benefit from mining activities in their region.

South Africa’s Mineral and Petroleum Resources Development Act, 2002 gives communities the opportunity to obtain a ‘preferential right’ to prospect or mine a mineral on land registered under the name of the community.

In Canada, special mining regulations are in place to recognise the rights of the aboriginals. There are some treaties called land claim agreements (LCA) which establish defined area of land for aboriginals and cover issues of mineral rights. These agreements also give specific rights to aboriginals. For example, the Nunavut LCA grants Inuits the title to about 3.5 million ha of land and mineral rights to approximately 0.35 million ha. It also gives rights to Inuits in controlling how mining will proceed on lands owned by them. Usually in such circumstances, mineral leases are given to third party to develop those resources in exchange of signing an Impact Benefit Agreement (IBA). Even if both surface and subsurface right belongs to the government then also some rights like consultation are provided to aboriginals.

Papua New Guinea, for instance, has incorporated provisions under which the mine lease holder is to provide compensation to the landholders on whose land mining is to take place, under its Mining Act 1992. The compensation is dependent on the negotiating skills of the community/landholders. For instance, the Ok Tedi copper mines have a special institutional structure to manage and implement the 52 per cent dividends received from the mine operations. This is a legally binding obligation that the company must follow as per the legislation passed in November 2001.

In Australia, the aboriginals have been given special rights in case mining happens on their land. These rights are to be realised by mining agreements. Different parts of Australia, has varying laws regarding aboriginals and mining. For example, the Aboriginal Land Rights Northern Territory Act, 1976 establishes a financial regime whereby affected aboriginal people receive a share of the mining royalties earned from activity on aboriginal land. Australian government guarantee all mining royalty for aboriginal interests except 30 per cent which is reserved for the owners of the affected area.

Companies will lose profits? Hogwash
The CSE analysis clearly shows that the Indian mining sector enjoys huge profits. An analysis of the annual reports of three major non-coal mining companies (Manganese Ores India Ltd, Sesa Goa and National Mineral Development Corporation or NMDC) indicates that in 2009-10, their average profit after tax (PAT) was about 50 per cent of their turnovers. In the case of Coal India Limited, this was about 18 per cent.

Assuming the draft MMDR Act, 2010 becomes a law, the CSE analysis of companies shows that it will not make any material difference to the profitability of the company. After sharing 26 per cent of the net profit with the affected community, the PAT of National Mineral Development Corporation – for instance -- will still be 41 per cent of its turnover (from 55 per cent). In the case of Coal India Limited, PAT will become 14 per cent of its turnover from 18 percent.

Rich lands, poor people
Almost all the country's minerals are located in regions that also hold most of its forests, rivers and tribal populations. Mining and quarrying has destroyed large tracts of forest land in these areas, affecting the ecosystem and the livelihoods of the already impoverished tribals.

The top 50 mining districts of India, that account for more than 85 per cent of the value of minerals produced in the country (Rs. 85,00 crore), have close to 50 per cent of the total mine lease area in the country. These districts also have, on average more poverty, more forest cover and larger tribal population than rest of the country. According to CSE analysis, at least 2.5 million people are directly affected by mining in these districts which include those who have lost their land and livelihoods.

The mining affected people in Odisha would have got about Rs 1,750 crore as share of profit from mining companies. This could have been used to reduce hunger, provide better health and education infrastructure and to ultimately bring people out of poverty.

CSE examines a few cases in the state: Keonjhar currently produces more than one-fifth of India’s iron ore and contributes more than Rs 7,000 crore to value of minerals produced in the country. Worse, mining has done nothing for Keonjhar’s economic well being. Over 50 per cent of the district’s population is below poverty line (BPL). If the draft MMDR provisions would have been implemented for the present year, the affected people of the district would have money to the tune of Rs 750 crore as profit share (2010-11 figures). Every BPL household in Keonjhar would have got at least Rs 40,000 annually.

Similarly, Sundargarh with Scheduled Tribes (ST) as about half its population, produces minerals worth Rs 2700 crore. The affected people of the district could get Rs 285 crore as share of profit from the mining companies. Every directly affected person from mining in Sundargarh could get Rs 45,000 annually.

Says Chandra Bhushan: “This money should be used not only to reduce present impoverishment but also for future well being of the communities like investment in health and education. There is huge opposition to this bill and it may get axed. It is very important for the communities that this bill goes through.” 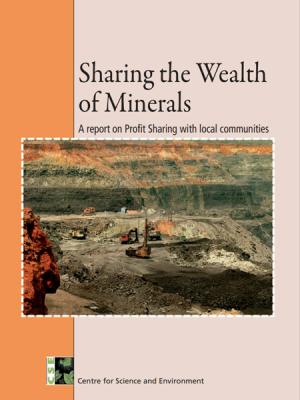 Report on Profit Sharing released in Odisha on June 24, 2011

The Mines and Minerals (Development and Regulation) Act, 2010

The bulletin of mining leases and prospecting licences 2009