The environmental clearance process is required for 39 types of projects and covers aspects like screening, scoping and evaluation of the upcoming project. The main purpose is to assess impact of the planned project on the environment and people and to try to abate/minimise the same.

The process consists of following steps:

• Project proponent identifies the location of proposed plant after ensuring compliance with existing siting guidelines. If project site does not agree with the siting guideline, the proponent has to identify other alternative site for the project

• The project proponent then assesses if the proposed activity/project falls under the purview of environmental clearance. If it is mentioned in schedule of the notification, the proponent conducts an EIA study either directly or through a consultant. If the project falls in B category, the project goes to state government for clearance which further categorise into B1 and B2 projects. B2 projects doe not require preparation of EIA reports.

• After the EIA report is ready, the investor approaches the concerned State Pollution Control Board (SPCB) and the State Forest Department (if the location involves use of forestland). The SPCB evaluates and assesses the quantity and quality of effluents likely to be generated by the proposed unit as well as the efficacy of the control measures proposed by the investor to meet the prescribed standards. If the SPCB is satisfied that the proposed unit will meet all the prescribed effluent and emissions standards, it issues consent to establish (popularly known as NOC), which is valid for 15 years.

• The public hearing is a mandatory step in the process of environmental clearance for certain developmental projects. This provides a legal space for people of an area to come face-to-face with the project proponent and the government and express their concerns.

The process of public hearing is conducted prior to the issue of NOC from SPCB. The District Collector is the chairperson of the public hearing committee. Other members of the committee includes the official from the district development body, SPCB, Department of Environment and Forest, Taluka and Gram Panchayat representative, and senior citizen of the district, etc. The hearing committee hears the objections/suggestions from the public and after inserting certain clauses it is passed on to the next stage of approval (Ministry of Forest and Environment).

• Environmental appraisal: The documents submitted by an investor are first scrutinised by a multi-disciplinary staff functioning in the Ministry of Environment and Forests who may also undertake site-visits wherever required, interact with the investors and hold consultations with experts on specific issues as and when necessary. After this preliminary scrutiny, the proposals are placed before specially constituted committees of experts whose composition is specified in the EIA Notification. Such committees, known as Environmental Appraisal Committees have been constituted for each sector such as River Valley, Industries, Mining etc. and these committees meet regularly to appraise the proposals received in the Ministry. In case of certain very special/controversial projects, which have aroused considerable public interest, the committee may also decide to arrange for public hearings on those projects to ensure public participation in developmental decisions. Announcements for such public hearing shall be made atleast 30 days before through newspapers. On the basis of the exercise described in the foregoing paragraphs, the Appraisal Committees make their recommendations for approval or rejection of particular projects. The recommendations of the Committees are then processed in the Ministry of Environment and Forests for approval or rejection.

• Issues of clearance or rejection letter: When a project requires both environmental clearance as well as approval under the Forest (Conservation) Act, 1980. Proposals for both are required to be given simultaneously to the concerned divisions of the ministry. The processing is done simultaneously for clearance/rejection, although separate letters may be issued. If the project does not involve diversion of forest land, the case is processed only for environmental clearance.

Once all the requisite documents and data from the project authorities are received and public hearings (where required) have been held, assessment and evaluation of the project from the environment angle is completed within 90 days and the decision of the ministry shall be conveyed within 30 days thereafter. The clearance granted shall be valid for a period of five years for commencements of the construction or operation of the project.

The process is summarised in Figure 2.1: Environmental clearance process in India. 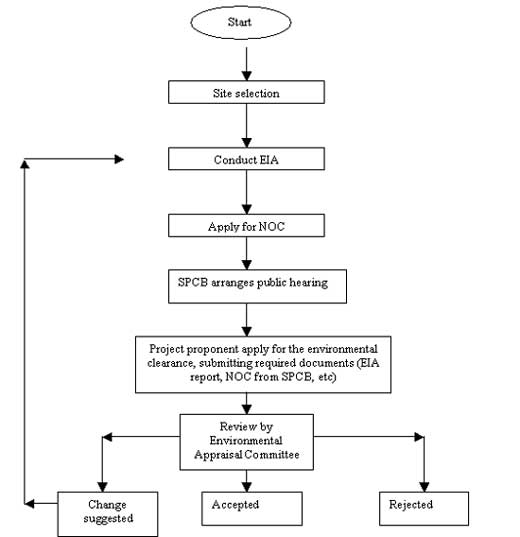 Industrial projects located in any of the following notified ecologically fragile/sensitive areas would require environmental clearance irrespective of the type of project:

PUBLIC HEARING
Involvement of the public is one of the fundamental principles of a successful EIA process. It not only provides an opportunity to those directly affected by a project to express their views on the environmental and social impacts of the proposal but also brings about transparency in the environmental clearance system. Nearly all EIA systems make some sort of provision for public involvement. This could be in the form of public consultation (or dialogue) or public participation (which is a more interactive and intensive process of stakeholder engagement).

Most EIA processes are undertaken through public consultation rather than participation. Public consultation refers to the process by which the concerns of the local people regarding the adverse impacts of a project are ascertained and taken into account in the EIA study. This concept was legally introduced in India in the form of ‘public hearing’ in 1997. Since then the public hearing process has been conducted as a mandatory step of environmental clearance for most projects and activities.

The public consultation process ensures an equitable and fair decision-making process resulting in better environmental outcomes. The type of consultation, whom to consult during EIA activities, when and how to do so and who should do it all vary significantly from project to project. This depends on the needs of the project. However, it is an important component for all kinds of project. This is because public consultations help allay the concerns of the local community, and reduce inaccurate information in the EIA report.

Ideally public consultation should start from when the idea of the project is conceived and continue throughout the course of the EIA. The five main stages when public involvement can take place in the EIA process are screening, scoping, impact analysis and mitigation, review of EIA quality, and implementation and follow up.

In India, the role of the public in the entire environment clearance process is quite limited. Public consultation happens at a very late stage when the EIA report is already prepared and the proponent is about to present it to the review committee for clearance. This means that the EIA study is unable to take into account the concerns and issues important to public. Even if the members of the community raise certain issues in the public hearing process, they have no means of knowing if it actually gets addressed in the final EIA report as they have no access to it. There are several weaknesses in the public hearing process as it exists now. Instead of becoming a participatory forum it has become a mere procedure.

There was a chance to address some of these weaknesses in the new notification and give more teeth to the entire public hearing process. However, there is very little improvement in the new notification, instead it has now added a provision which makes it possible to completely forego the public hearing process if the situation is not conducive for conducting hearing as felt by the local administration. This provision can be misused to further limit the role of the public in the entire process.

There have been several cases in the past that have shown that the public hearing process has failed to meet its objective of effectively involving people in the clearance process. Several means have been devised to keep the public away such as poor circulation of notice, politics, etc.