The Hon’ble Supreme Court in its order of May 09, 2002 has directed Environment Pollution (Prevention and Control) Authority (EPCA) to examine the following:“Investigate the pricing of CNG as done by the IGL and give report to this court whether there is any justification for the figure of Rs16.83 per kg.

In giving this report the Bhure Lal Committee should take into consideration the price at which petrol, diesel and kerosene are sold in Delhi. It will also indicate as to what extent of subsidy or cross subsidization, if any, given by the Central Government in respect of petrol, diesel or kerosene as compared to CNG.”

“Learned Amicus Curiae draws our attention to the practice, whichis prevalent in some other countries to the effect that tax concessions are given in respect of CNG so as to encourage the use of said fuel in an effort to bring down pollution, a topic about which the government seems to have little concern.”“The Indraprastha Gas ltd and the Union of India shall furnish to Bhure Lal Committee any particular which are asked for by the said committee. The Bhure Lal Committee will be at liberty to take assistance from any cost accountant or any other expert in the matter.” 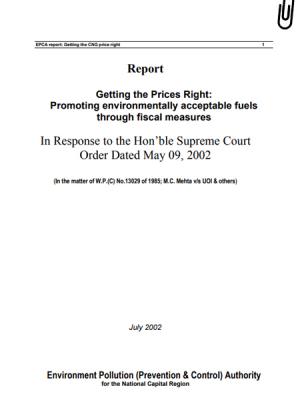