On April 1, 2001, there was mayhem in Delhi. Not many buses were plying on the roads as the Supreme Court ruling on moving the entire public transport fleet to CNG, came into effect. Unfortunately this had not been complied with. Without diluting the original order the Supreme Court only allowed a conditional extension of the deadline till September 30, 2001.

What reigned supreme was confusion and doubts about CNG technology. Only half baked information was thrown around, sensational stories were carried, false claims made to create fear about CNG’s safety and its health effects. No effort was made to build up confidence in CNG technology. It was never communicated effectively that to protect public health it was important that CNG be used to reduce the dangerously high level of particulate pollution in the city.

The main worry at that stage was whether the right systems and regulations were inplace to ensure that nothing would go wrong with the process of moving towards CNG. It almost appeared that for any administrative lapse the blame would be put on the CNG technology. Lack of information made premeditated rumour-mongering so easy, making a normal technical snag look like a disaster. There was also an additional concern for lack of competition in the market given the few players —just two bus manufacturers and one conversion agency. Weak regulations and monopoly could result in price manipulation, compromises in quality, and choice of inappropriate technology.

Centre for Science and Environment (CSE) was concerned as it believed that the CNG strategy was one of the most important decisions taken so far to control particulate pollution that kills one person per hour in Delhi. If there were doubts about safety of CNG, suspicion of high emissions of some pollutants from converted buses, distrust of it on-road performance, it needed to be investigated and proper regulations put in 5 THIRD DRAFT ENGINES OF THE DEVIL place to get the maximum benefit from this process. Yet at no point did the government think it fit to investigate and assess the new technology, evaluate the infrastructure facilities and monitor enforcement of safety rules to allay fears. 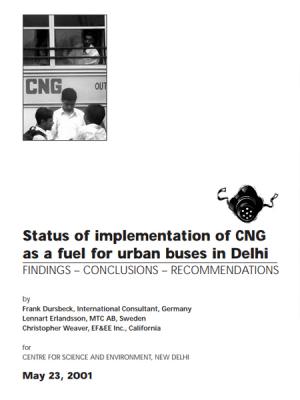