“During the course of argument, it was contended before us that low sulphur diesel should be regarded as a clean fuel and buses be permitted to run on that. It was submitted that in some other countries ultra low sulphur diesel which has sulphur content of not more than 0.001 per cent is now available. We direct the Bhure Lal Committee to examine this question and permit the parties to submit their written representations to the Committee in this behalf. The Committee may submit a report to this Court in that behalf as also indicate as to which fuel can be regarded as`clean fuel’, which does not cause pollution or is otherwise injurious to health”.

The matter again came up for hearing on 27th April, 2001 when Ministry of Petroleum and Natural Gas submitted I.A. No. 116 to seek modifications of the order, dated 26th March, 2001 and after hearing the Hon’ble Supreme Court passed the following order:

“We do not think that any modification is required to be made in our earlier order. We however, wish to clarify that our order, dated 26th March, 2001 has to be read along with our order, dated 28th July, 1998. In so far as other pleas raised in this application as regards “clean fuels” are concerned, we direct that a copy of this application be sent to the Bhure Lal Committee for its examination. By our order, dated March 26, 2001 we had directed Bhure Lal Committee to submit a report to this Court regarding clean fuels. Mr. Harish N. Salve, learned Solicitor General submits that Bhure Lal Committee has construed that order to imply as if it is required to submit a report only on the question whether low sulphur diesel can be regarded as a clean fuel. 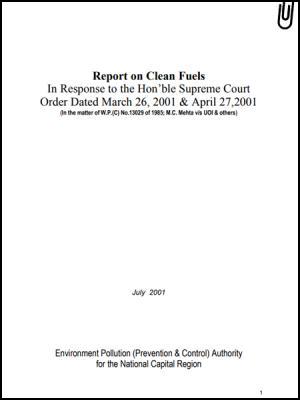