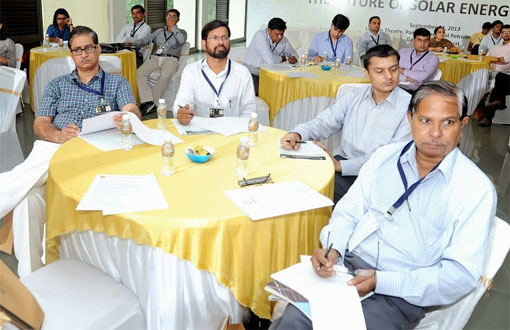 Gandhinagar, September 23, 2013: Solar power development in India has stagnated and needs policy reforms on issues like financing and domestic content requirement to re-energise the sector, recommended experts at a conference on ‘The future of solar energy in India’ held here today.

The conference was jointly organised by Centre for Science and Environment (CSE), the New Delhi-based research and advocacy body and the Gujarat Energy Research and Management Institute (GERMI). The objective of the conference, said CSE deputy director general Chandra Bhushan, was “to take stock of the existing status of solar energy in India and develop a policy roadmap for its sustainable growth”.

As of July 31, 2013, India had an installed capacity of more than 1.8 GW of solar energy. Gujarat’s solar policy accounted for a major proportion of this development. The Union ministry of new and renewable energy (MNRE) plans to commence phase II of the national solar mission with allocation of 750 megawatt (MW) of solar projects. The launch of the second phase is delayed and is now awaiting Cabinet approval at the Centre. Bhushan stated that ‘If India wants to achieve the 20 GW aimed in JNNSM by 2022, there should be a growth rate of 30% per annum in solar installation.’

One of the key points of discussion in the conference was the state solar policies. Experts from GERMI stated that while many state-level incentives have sprouted up, assistance and support by the Central government needs to be in place to ensure the sustenance of such state-wide models. It will also ensure there is no unfair burden on any state due to the high cost of solar energy.

With respect to financing, Kanv Garg of the South Asia Sustainable Energy team at the World Bank said ‘3,600 MW of solar under JNNSM phase-II would require around US $6.4 billion, and also a debt financing requirement of around US $4.5 billion’. The experts insisted that commercial lending should be encouraged to reduce dependency on central and state subsidies. Industry wants there should be more enforcement of renewable purchase obligations (RPO).

CSE believes that incentivizing only capital expenditure might lead to deployment of inefficient or unproven technologies that may not contribute much in terms of electricity generation or the life of the project. Solar projects should be granted ‘priority lending’ status for banks to allocate funds specifically to solar plants. In addition to this, takeout finance should be established like in the case of infrastructure projects that address issues that might arise for the long-term debt financing to core projects.

Another reason for the delay in phase II of JNNSM has been the disagreement over the issues of domestic content requirement (DCR) and how to develop the Indian manufacturing sector. The Indian Solar Manufacturers Association wants to mandate usage of domestically (Indian) manufactured cells and modules, irrespective of technology. Developers oppose the idea. They think that restricting the sector to domestic manufacturers is would only end up in trade wars with other countries.

Experts at the conference supported the idea of developing an indigenous manufacturing sector. However, any DCR mandating developers to buy Indian modules and cells will not only lead to higher costs for developers, and thereby higher solar electricity tariffs but may also encourage a stagnant and  protectionist industry with little incentive to invest in improving their product. There is also the risk of any DCR being circumvented through re-branding imported cells and modules and forging documentation.

Many recommendations were put on table to support domestic manufacturing. Experts from GERMI recommended that a marginally incremental duty be imposed on imports such that some room is given to domestic manufacturers to reach scales and establish themselves to compete against cheaper imports. Experts from CSE recommended a financing package to reduce the rate of interest for the loan taken by the developers. A lower rate of interest could be provided to solar power developers under JNNSM willing to use Indian solar modules and cells.

Industry representatives and experts recommended that the phase II of the national solar mission should be announced quickly by the Central government to kick-start the solar energy development in the country.

The Future of Solar Energy in India