This event is now completed

Discussion will focus on:

World Toilet Day is held every year on 19 November. It has been an annual United Nations Observance since 2013. World Toilet Day celebrates toilets and raises awareness of the 3.6 billion people living without access to safely managed sanitation.

He was named Schwab Fellow if the World Economic Forum 2006, Ashoka Global Fellow 2007, Time Magazine’s Hero of the Environment 2008, Queen Elizabeth's Commonwealth Points of Light Award 2018, received his Master in Public Administration at the LKY School of Public Policy in 2013, and Honorary Doctorate from the University of Strathclyde in 2022.

Over the last 21 years, he create a global Toilet movement that reduced the population without proper Sanitation from 40% to 25% today.

His work has benefited about 1.2 billion poor people.
https://www.worldtoilet.org/who-we-are/founder/

About CSE
Centre for Science and Environment (CSE) is a New Delhi based recognised global think tank, policy, advocacy, research and capacity building institution set up in 1980’s (www.cseindia.org). CSE works as a think tank on environment-development issues in India, poor planning, climate shifts devastating India's Sundarbans and advocates for policy changes and better implementation of the already existing policies.

CSE researches into, lobbies for and communicates the urgency of development that is both sustainable and equitable. The centre is a recognised training entity and Centre of Excellence in the Sustainable Water Management area assisting the Ministry of Housing and Urban Affairs, Government of India. 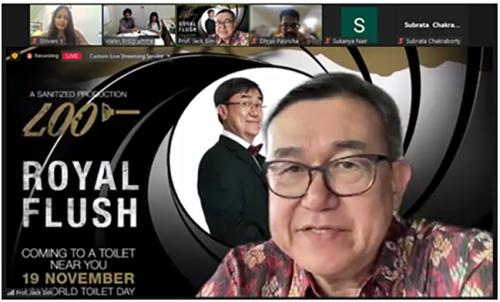