Antimicrobial resistance (AMR), particularly antibiotic resistance, is recognized as a global public health threat today. It arises when microorganisms are able to survive exposure to a drug that could normally inhibit their growth or kill them. When AMR arises and spreads in infection-causing bacteria, treating common infections and managing surgical procedures becomes difficult, resulting in prolonged hospital stays, expensive treatments and high economic burden. AMR is estimated to claim more than 10 million lives per year by 20501 and result in lost outputs worth US $100 trillion, if not contained timely. It can also potentially impact food safety, nutrition security, livelihood and attainment of Sustainable Development Goals.

AMR has been recognized as a 'One Health' issue owing to its significant linkages with the health of humans, animals and environment. Antibiotic misuse and overuse in animals – particularly food-animals and in crops is an important driver of AMR. The environment also has a key role in the emergence and spread of AMR. Waste from drug manufacturing units, healthcare settings (human and veterinary), food production systems (such as farms, slaughter-houses, processing units), and community are considered as key contributors of AMR causing determinants such as resistant bacteria, antibiotic residues and resistance conferring genes in the environment. The environment is thus a large pool of these determinants. However, in terms of AMR containment, the human health side of AMR problem has received the most attention, followed by the animal side. The environmental aspects of AMR have received limited attention in comparison. 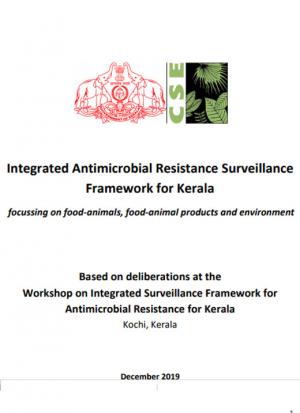