Antimicrobial Resistance (AMR) is a global health crisis of an unprecedented scale, which apart from huge health and economic loses, is expected to impact the attainment of several Sustainable Development Goals. AMR is estimated to globally claim more than 10 million lives per year by 2050 and result in global economic losses worth US $100 trillion. India is expected to be heavily impacted unless adequate measures are taken urgently. The key reasons for rising AMR include overuse and misuse of antibiotics in human health, food-animal production, agriculture along with poor waste management from households, farms, factories and healthcare settings.

Towards the objective of containing AMR in the country, India released its National Action Plan (NAP) on AMR in 2017, along with the Delhi Declaration on AMR. India’s NAP-AMR calls for States and Union Territories to develop their own State Action Plans (SAPs) to facilitate greater action on the ground. In 2018, Kerala became the first Indian state to develop its own Kerala Antimicrobial Resistance Strategic Action Plan (KARSAP).The Centre for Science and Environment (CSE), a non-profit public interest research and advocacy organization, working on issues of public health, environment and development in India and global south, has been collaborating with the Department of Health and Family Welfare, Kerala to support implementation of the KARSAP 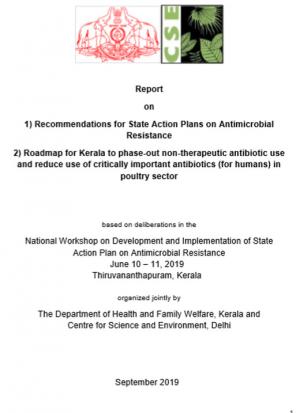