Antibiotics are becoming increasingly ineffective. Antimicrobial Resistance (AMR)—Antibiotic Resistance (ABR) in particular—is a huge public-health threat globally, more so in a country like India. It is linked with high disease and economic burden on people and nations. It can also impact food safety, nutrition security, livelihood and attainment of Sustainable Development Goals. ABR is truly a ‘One Health’ issue which recognizes connections between humans, animals and the environment, both as a cause and solution.

Following the adoption of the Global Action Plan on AMR in 2015 at the World Health Assembly, countries are getting ready with their multi-year National Action Plans (NAPs) to address AMR in line with their nature of problem and extent of technical and financial resources at hand. Many countries have developed and shared their NAP by May 2017. Meanwhile, the World Health Organization (WHO), Food and Agricultural Organization of the United Nations (FAO) and World Organization for Animal Health (OIE) continue to support NAPs. The issue has also received global political support at the United Nations General Assembly in 2016.

While ABR is recognized as a ‘One Health’ issue, and a lot has been happening across the globe, the misuse of antibiotics in the food-animal production system and environmental spread of ABR continue to receive limited attention as compared to human health. For a country like India, which not only has a poor state of environment and waste management but is also among the top global producers of fish, poultry and dairy, the animal–environment contribution to ABR could be significant. Possibly much more than we could anticipate, if we take into account that the total volume of antibiotic use is likely much higher in animals than in humans.

In 2014, when CSE found antibiotic residues in chicken meat due to rampant nontherapeutic antibiotic use, there were questions raised about its linkages with ABR.

We were told that residues do not mean resistance. Now, in order to understand the extent of resistance in poultry environment and its spread outside, our Pollution Monitoring Laboratory has tested for ABR in several poultry farms (broiler) across four states in north India. We have tested litter, poultry farm soil and agriculture soil where litter is used as manure. Our aim was to first understand the extent of ABR in the poultry environment and then establish if the resistance bacteria is moving out of poultry farms into the environment through waste disposal. What we have found indicates that urgent action is required to stop the misuse of antibiotics in poultry. In addition, waste management in the poultry industry must be improved significantly. Disposing of litter in the environment without destroying resistant bacteria is fraught with danger.

We believe that this study will add to the growing scientific evidence and reinforce the need for urgent action on ABR. 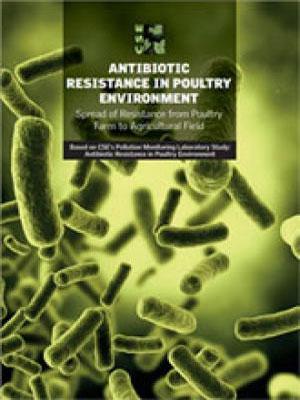