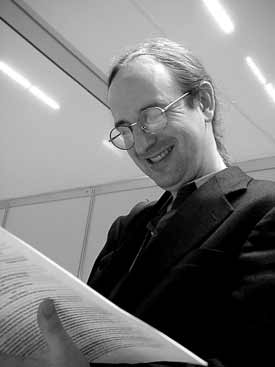 PAUL BAUER from the Energy and Resources Group, University of California at Berkeley, co-founder of the NGO EcoEquity, on advancing the principle of per capita equity in the US climate debate

Why did you decide to form a group to push equity in the US?
EcoEquity goes back to an informal working group that has existed for a while at Berkeley. The group worked on and published an article in Science in September 2000, which was signed by several eminent academicians, including John Holdren, member of President Clinton’s committee of advisors on science and technology (PCAST) and chair of the committee’s energy research and development study. After the article, the question arose of what we should do next. We spoke to activists and academics who felt there was big gap in the US where none of the big groups have a strong position on per capita equity or contraction and convergence. They felt there was need for such a group.

Do US groups not support per capita equity in the climate negotiations?
Many people - academics, the scientific community, in the environmental movement and perhaps even in the policy community - see per capita environmental rights as both just and necessary, but will not say so publicly because they want to be seen as ‘realistic’. Our criticism is that large groups haven’t raised the issue and we think they ought to. Their attitude is that if you want to have access to the US delegation, don’t talk equity.

The goal of our organisation is to make it possible for people to come out of the closet in support. There are groups and people within groups who support the position.

There will be no meaningful treaty unless per capita is adopted with convergence within a finite period of time. Even if the Kyoto Protocol scrapes through, there will be no second commitment period unless there is per capita and US NGOs have not confronted that. Their short-term argument to not get per capita is making the next phase of the treaty impossible.
What response have you got from the US government?

The few times we’ve had the opportunity to discuss it, we’ve had very hostile reactions.

Will you get public support and how?
We will start with academics who have nothing to lose from openly supporting this position.

Get publications into media outlets and academic journals. Get more general visibility. We will have to rely on a traditional grassroots strategy. If there is a ratification process there is going to be a debate in the US, it will provide us with an opportunity to bring up these issues.

Does 'sufficiently weak' include developing country participation?
It is hard to believe that the majority of the senators who signed the Byrd Hagel Resolution really believed that meaningful participation by developing countries should be part of the first commitment period. That is meant to be a smokescreen for actual fears of costs.

Why is so difficult to bring up equity issues in the US?
Since Reagan, there has been a very conservative drift and the whole political discourse has shifted to the right. Instead, the focus has shifted on opening up world markets for the US, to US capital and US principles of operation. The groups within the US have to take positions within the realms of what the US government is proposing, and they are not interested in redistribution. These groups are narrowly focused on environment.