Losing Solid Ground: MMDR Amendment Act, 2015 and the state of the mining sector in India

For over a decade, the country has debated the need to reform the mining sector by amending the Mines and Mineral (Development and Regulation) (MMDR) Act, 1957. The conversation started with the publication of the report of the High-Level Committee on National Mineral Policy (2006) set up by the erstwhile Planning Commission. In 2008,Centre for Science and Environment (CSE) published a detailed report on the mining sector titled Rich Lands, Poor People: Is sustainable mining possible? We pointed out that minerals are found where forests are found; from where water comes and where adivasis and the poorest of India live. These are also the places where Naxalism is spreading. We intervened to ask for a new social and environmental contract in the mining sector, keeping in mind the need to utilise mineral resources but also the interests of the people and the environment.

These debates fructified in the form of the Mines and Minerals (Development and Regulation) Bill, 2011; but due to disagreements within the UPA government and pressure from the industry, the Bill was allowed to lapse in February 2014. We believe that the MMDR Bill 2011 made an attempt to balance all concerns. There were lacunae in it but it recognised the need to incorporate community interests and environmental protection. In this way, there was a movement forward in the 2011 Bill from the 1957 law.

Now we have the Mines and Minerals (Development & Regulation) Amendment(MMDR) Act, 2015 which was passed by the Parliament without much discussion with the stakeholders. We believe that the Amendment Act is one-sided. While it protects the interests of miners and increases revenue for the states, it does little to protect the interests of the people and the environment. The Amendment Act is short-sighted and fails to tackle key issues. The problems faced by the mining sector are not just due to lack of transparency and accountability in mine allocations, but because of enormously reckless mining that has destroyed the environment and created problems for the local people. Therefore, there is a need for supervision of mining operations. Unfortunately, the 2015 Amendment Act utterly fails in providing this protective framework. 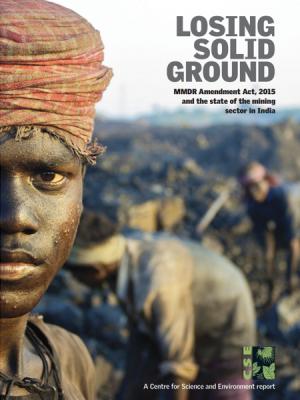