Patna drinks its own sewage

CSE's 7th State of India Environment Report, Excreta Matters, was released, debated and discussed in Patna at seminar held at A N College on May 25, 2012. The meet was attended by 90 people, including Prem Kumar, Minister of Urban Development, Government of Bihar, along with senior officials of the Bihar Urban Development Corporation, Bihar Jal Parishad, PHED and State Pollution Control Board. Civil society representatives and concerned citizens too were present. 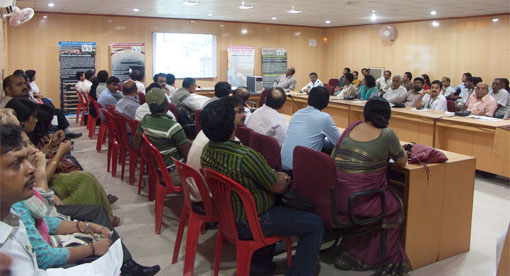 The report, which provides a detailed analysis of the water-sewage profile of 71 cities across India, including Patna, was released by the Urban Development Minister, who has agreed to look in to the recommendations of CSE and workshop. “I will incorporate the recommendations in to the urban reform agenda in Bihar,” said the Minister.

Patna suffers from a problem of plenty – of water and sewage. It depends on the Ganga and groundwater for drinking. Less than 10 per cent of the city’s population is connected to a sewage network; which means 90 per cent of the city’s excreta is discharged into open drains and eventually into the same river! From the drains, it also percolates into the groundwater which is pumped up by the Patna Municipal Corporation (PMC). 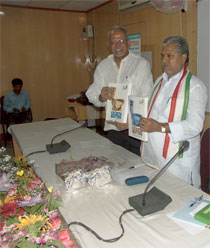 “Bihar’s water quality problems are worsening by the year on account of poor sewage management,” said A K Ghose at the workshop, head of the Environment and Water Management department of A N College. This is because of increasing urbanization coupled with faulty and non-inclusive planning, he added.

Traditionally there are several ways of ecologically friendly sanitation practices. “Gandhi ji was was a pioneer and it is unfortunate that we refuse to integrated dry toilet systems in to our urban planning reforms,” said Prakash Kumar of Bihar Swast-WATSAN Cluster, a government of Bihar initiative supported by DFID. Instead we continue to replicate the unaffordable western sewerage system of flushing our waste away, he added.

Solid waste too is poorly managed in the city. “In fact there is little work on the subject in Bihar. Municipal Commissioners keep changing and no serious work is done. This is worrisome since we need holistic management for liquid and solid waste,” said Arbind Kumar, founder director of Nidan, a Bihar based non-profit.
How Patna fares

The city-based Public Health Institute has tested water samples and found more than half to be full of bacterial contamination and unfit for human consumption. Against the permissible level zero faecal coliform count, tests have indicated an average of 5,056 most probable number per 100 mililitre sample.Tests have shown the total coliform count per 100 mililitre sample to be an average of 13,533! Patna is, therefore, drinking its own sewage. 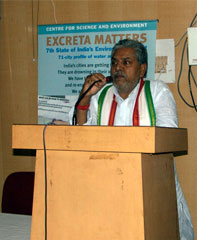 The city needs about 215 million litres per day (MLD) of water, and gets 202 MLD. Just 60 per cent of the population is covered by the water supply system. There are no water treatment plants, assuming that ‘Ganga Jal’ is safe for drinking. About 20 per cent depend on standposts while the rest have their own tube wells. In the PMC area, water supply is for six hours a day totaling 107 litres per person per day, while outside, this it is a mere 43. The PMC’s cost recovery on water supply is just 12 per cent of its expenditure – which means it does not have the money to upgrade the water supply infrastructure.

The PMC estimates the city generates around 290 MLD of sewage, of which half flows into the Ganga directly; the rest seeps underground polluting the groundwater. It has four sewage treatment plants with a combined capacity of 121 MLD, but only a little over 50 MLD of sewage reaches these plants since the sewage system is completely dilapidated. The plants also perform poorly on account of power failures, poor maintenance and non-functional treatment zones.

“To meet its future demand, Patna is making grand plans to refurbish its sewage treatment system by adding more sewage treatment plants, even though existing ones remain under-utilized. However, what Patna needs is better a sewage network and alternatives to sewage treatment other than large centralized plants that it cannot afford to operate,” says Nitya Jacob, programme director, CSE water programme.