Potential of Rainwater Harvesting in Rwanda

According to the World Economic Forum’s Global Risks Report 2018, water crisis is one of the most pressing threats perceived as having the biggest impact in the next 10 years. Across continents, natural water resources are becoming more strained each year with increasing urbanization. A similar trend is also observed in Rwanda which has one of the highest population densities in Africa (483 people/sq. Km). Its capital, Kigali is a major urban centre with 76% of the population categorized as ‘urban’.

At the same time, Rwanda is also among the countries having the lowest per capita water availability (670m3/capita/year) and storage capacity in Africa. Besides inadequate per-capita availability, floods accompanied with soil erosion are a common issue in Rwandan cities. Given its current scenario, there is a need to look into existing water supply and stormwater management scenario.

Despite these setbacks, Rwanda has a high potential of Rainwater Harvesting (RWH) with an annual average rainfall of 1200 mm with monthly consistency throughout the year. The national provisions like VISION 2020, Economic Development and Poverty Reduction Strategy highlight rainwater as the most feasible option for providing alternative source of water. However, RWH is not considered as an immediate response to the issue of water stress in the country. Considering its immense potential, RWH must be promoted as part of infrastructure development to achieve water augmentation and stormwater management. 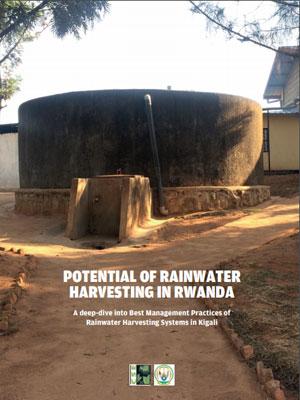