Pune has a surplus of water and sewage, polluting its rivers

Pune has an abundance of water from the Khadakwasla dam but its intra-city distribution is extremely uneven. Some areas get as much as 600 litres per capita per day (lpcd) while others get barely 100. This results in enormous quantities of waste water and sewage and despite having an installed capacity to treat 599 million litres a day (MLD) of sewage, its two main rivers, the Mula and Mutha, remain severely polluted. 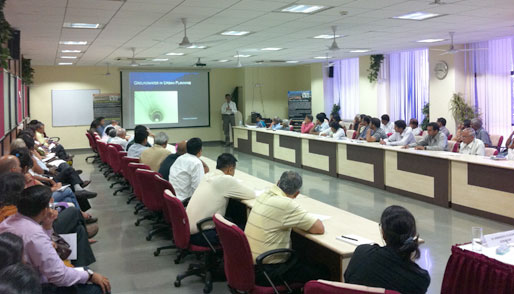 This was one of the main outcomes of the workshop to launch CSE's 7th State of India Environment Report, Excreta Matters, in Pune on 8th June. The meet was attended by 90 people, including the state Irrigation Department, representatives from the Pune Municipal Corporation, as well as civil society representatives and concerned citizens.

The Citizens report, which provides a detailed analysis of the water-sewage profile of 71 cities across India, including Pune, was released by Professor Madhav Gadgill, himself a citizen of Pune and well known ecologist who has held several positions including being member of the Science Advisory Council to the Prime Minister in the late 1980's.

The Mula-Mutha River water in Pune had deteriorated in quality. Its biological oxygen demand, an indicator of organic pollution, has risen to over 30 mg/l, more than ten times the permissible limits for bathing. Reason: Pune is a classic case of over consumption; the Municipal Corporation is currently supplying water sufficient for the projected population in the year 2050. More water, means more sewage, beyond the quantum its sewage treatment plants can treat. As a result there is greater pollution loads discharged in to the Mula-Mutha, two rivers that confluence within city limits and serve to flush away Pune's excreta.

The Pune Municipal Corporation has a waterworks capacity to treat and distribute 1292 MLD. It is however currently supplying 1222 MLD of water at a staggering average supply rate of 321 LPCD, more than double the standards set by the Central Public Health and Environmental Engineering Organisation, a technical wing of the Ministry of Urban Development. The actuals, after leakages in the piped network, work out to 866 MLD, or 228 LPCD.

There is inequity in water supply in the city; hours of water supply vary from less than 2 hours a day to round the clock water supply in some parts of the city. On average there is 6-8 hours of water supply across the city, say PMC officials. Although citizens claim there is an interplay of power-politics in supply, municipal officials say that the city's topography is solely to blame. Low lying areas receive 600 LPCD versus less than 100 LPCD in topographically disadvantaged colonies. The piped network is 2,450 km in length and 100 % of water is officially supplied sourced from surface sources, the Khadakwasla lake. There are 4,500 private tubewells servicing parts, yet to be connected to the piped network.

Pune is attempting water for all, but can it deal with waste of all?

We are not protecting the natural recharge areas, said Himanshu Kulkarni, head of ACWADAM, a non-profit organsation based in Pune. We need to look beyond biodiversity, and understand the 'litho-diversity' of India, where 85 per cent of the world’s rock types are found. There are 1.5 billion urban dwellers dependent on groundwater, says Kulkarni, and looking to sustain yields is a major challenge often overlooked in city water supply management. In Pune, groundwater levels have reduced marginally, but the quality has altered over the years due to poor sanitation practices. The sewage generated by the city's 3.7 million inhabitants is 756 MLD, 33 percent of which is untreated and mixes with treated sewage before entering in the river, also percolating into aquifers.

The flagship scheme of the Pune Municipal Corporation is river front development and canalisation. The corporation is seeking to strengthen and line the Mula-Mutha river banks, remove encroachments, create retaining walls, resettle slums, dredge the river and develop the river as a water highway to de-congest the city centre. This project has been in the pipeline for several years, has escalated in cost, and is being contested in the High Court. CSE questioned these plans stating that Pune is a moderate rainfall area, although it is prone to spells of heavy rain June thru September. Hence modifying flows could possibly lead to backflows and flooding in the city, interfere with ecological flows and increase flow velocity, leading to scouring of the banks downstream.

This seems ambitious for a corporation that until 2010 – 11, had an outstanding of Rs 306.47 crore from consumers, that it is finding difficult to collect. Also water tariffs have remained static at Rs 3 per kilo-litre since 2000 for domestic users, and Rs 16 per kilo-litre for commercial and industrial connections. There is a 48.37% shortfall in collection of water charges in 2009-10 (budget estimates and actual revenue), while 60% of total expenditure is on energy.

Diversion to urban conurbations and utilising more than allocated amounts is leading to conflicts in the state. “Since 2003, 1500 million cubic metre of water has been diverted from agricultural allocations to urban or industrial use in Maharashtra. This has implications for 357,600 hectares in the state or 3 lakh families at an average of 1 hectare land holding. This diversion is now a fait accompli,” says K J Joy, convenor of the Forum for Policy Dialogue on Water Conflicts in India.

Maharashtra had published the state water policy in 2003, which controversially gave industry a higher allocation priority versus agriculture. While this has now been reversed due to widespread protests in the state, this has implications as articulated in the CSE study on water quality, since it is not only important to gauge how much you use, but what also monitor the quality of used water as return flows.