Dehradun (Uttarakhand), October 7, 2015: Journalists covering the Himalayan region are well aware of the multiple problems that this extremely vulnerable area is confronted with. But is their reportage succeeding in uncovering the real reasons behind the mess, the ‘Himalayan blunders’ that this region has endured over the years? 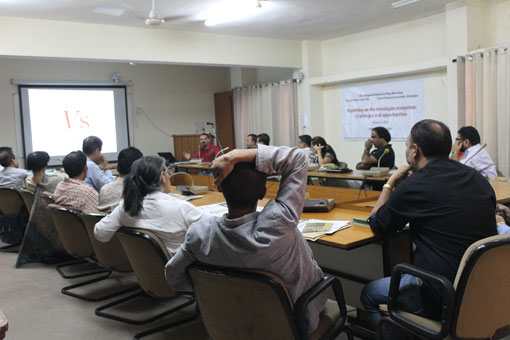 This was one of the many questions, answers to which were sought at a day-long media briefing workshop organised here today by the New Delhi-based public advocacy and research think tank Centre for Science and Environment (CSE). The workshop was conducted at the city-based Forest Research Institute (FRI), and was attended by about 30 journalists from five states from the Himalayan region – Uttarakhand, Jammu and Kashmir, Himachal Pradesh, Arunachal Pradesh and Assam.

Among the key experts who spoke at the workshop were Dr Savita, director of FRI; Anumita Roychowdhury, CSE’s executive director-research and advocacy; Richard Mahapatra, managing editor of Down To Earth, the science and environment fortnightly; Ruchi Badola, head, department of eco-development planning and participatory management, Wildlife Institute of India; R K Mukerji of the Technology, Advocacy and Research Network; D P Dobhal, senior scientist at the Wadia Institute of Himalayan Geology; Arun Joshi, resident editor of Tribune in Jammu and Kashmir; and Dakter Esse, editor of the Itanagar-based Dawn-Lit Post, etc.

The workshop’s themes of discussions ranged from urbanisation and its resultant problems (such as growing air pollution and mobility crisis) and forests, to climate change and extreme weather events, 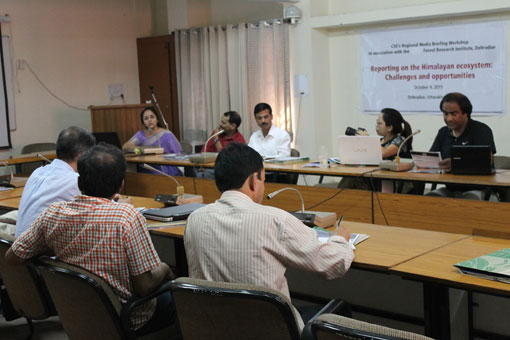 Speaking on the occasion, Richard Mahapatra said: “All of us know that Himalayas are the world’s youngest mountain range, and landslides and various other kinds of natural disasters happen here regularly. It is an extremely vulnerable region – but what are the factors that have made this region more fragile? There are two -- one, climate change-related extreme weather events, like the floods that have ravaged Uttarakhand or Jammu and Kashmir. Two, our uncontrolled efforts to ‘develop’ the region: an abundance of roads, dams, cities, buildings etc have compounded the problems in this region.

Added Anumita Roychowdhury: “The Himalayas will always remain vulnerable. Development here will not work if we do not remember that and take the true nature of the region into account. For instance, building in this region without keeping its seismicity in mind can have disastrous results, especially when predicting earthquakes is still a very uncertain science.” 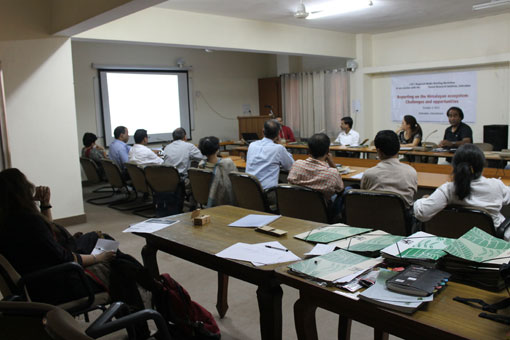 CSE, founded in 1980 and now headed by noted environmentalist Sunita Narain, is known for its work on urban air pollution, water management, climate change policy, industrial pollution and food safety. Souparno Banerjee, director of the Centre’s media programme, said: “CSE has always considered media as one of its strongest pillars of support. On one hand, we have worked to enhance the capacity of journalists to broaden their understanding of development issues. On the other, we have tried to learn from them what is really happening in the world. These media briefings and interactions by CSE bring this two-way conversation with the media alive.”