Uttar Pradesh is the most populated state of India. 95 per cent of its cities and towns are totally dependent on non-sewered sanitation systems. Only 31 towns (out of the 734 in the state) have partial sewerage system coverage; together, they manage to treat just 40 per cent of the sewage generated, says a 2021 report by the Central Pollution Control Board (CPCB).1

Sustainable and scientific management of faecal sludge and septage is, therefore, a priority for UP. Septage management has significant inclusive social outcomes, given that those dependent on septage systems are mostly the poorest and the marginalised. Women and other disadvantaged sections are often the worst impacted by poor sanitation. An effective and affordable septage management system will generate significant social, environmental and public health outcomes.

The state’s Faecal Sludge and Septage Management (FSSM) Policy commits to addressing septage management for the entire state by 2023. In the last two years, despite the slowdown induced by the Covid 19 pandemic, UP has invested in creation of septage management infrastructure and aim to achieve ODF++ status for 59 of its towns. 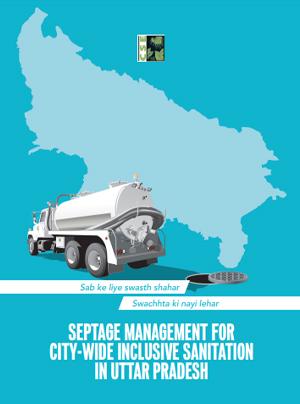