Revenge of the rich

Trump's election reflects the anger of the rich who did not get richer. This inequity is also at the core of the climate change challenge What does the ascension of Donald Trump to US presidency mean for climate change? Also, what does Trump mean for our inter-connected and by now highly globalised world?

On this Human Rights Day, we want to emphasise that the right to minerals lies with the local people, and so they must benefit

The oil price surge has left the market watchers and media agog. Expert views sparred on price insulation, energy security and our vulnerability. It was fascinating to follow the desperate bid to brag that the global crude price hike will not hurt Indian incomes as much as they did the last time. Oil dependence of Indian income is on the downturn as we are earning more from non-oil based IT sectors. Reportedly, India’s oil consumption to GDP ratio has fallen by 56 per cent since the nineties. 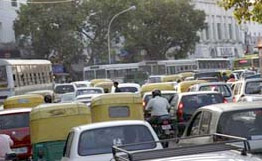 Here is what it takes to make an absurd number game -- cunning rules, crafty calculations and clueless regulators. Or how else do we describe the new proposal from the Steering Committee of Emissions Regulations (scoe) of the Union Ministry of Shipping, Road Transport and Highways on carbon dioxide (co2) emissions standards to improve fuel economy of cars and two-wheelers!