Sources deny reports that the Indian government supports the transfer of nuclear energy technology under the climate convention's Kyoto Protocol. 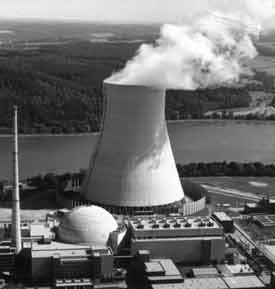 Denying rumours that India is demanding inclusion of nuclear energy under the Kyoto Protocol's Clean Development Mechanism (CDM), government sources involved with the climate negotiations say instead that they support the right of a country to choose their technology options for clean energy. Confusion persists, however, as the Indian Atomic Energy Commission (IAEC) has clearly voiced its approval of nuclear projects under CDM.

The Kyoto Protocol mandates a reduction of greenhouse gas emissions, particularly carbon dioxide, by at least 5.2 per cent for industrialised countries by the 2008-2012 period, compared to 1990 emissions. Instead of making the cuts at home, however, these countries can use CDM to make reductions in developing countries, by subsidising 'cleaner technology'. In return, they gain 'emission credits', which they can use to meet their 5.2 per cent target. Over the last few months, there has been some controversy over whether 'cleaner technology' could include nuclear energy, which is low in greenhouse gas emissions, but high in risks.

The official position of the Indian government as voiced at the negotiations so far has been that it only supports the transfer of renewable energy technologies under CDM. This is a considered position based on the fact that if developing countries agree to the transfer of fossil fuel energy technologies, they run the risk of being landed with outdated technology which they would have to phase out, once they have to make greenhouse gas reductions. But recent statements by IAEC officials, including chairperson Rajagopalan Chidambaram, supporting the transfer of nuclear technologies, could cost India its credibility in the climate negotiations. Chidambaram was recently quoted in the Indian press saying that CDM could make it economically viable to set up a nuclear power plant in the eastern region of India.(1)

It is not clear whether the IAEC has held any consultations with the Ministry of Environment and Forests, or the Ministry of External Affairs, the two government agencies dealing with the climate negotiations, before making the statements. But the position has drawn flak from at home and abroad. Dominique Voynet, French minister for environment, said at a recent meeting in France that large developing countries like India and China "are using guilt" (of industrialised countries, for their contribution to the global warming problem), and "hiding behind the poorer countries" (most likely to be affected by global warming) to demand nuclear technology under CDM. Such statements are likely to get more antagonism than support for India, and break the trust and leadership the country has received in the climate negotiations from the G77 group of developing countries, particularly with its demand for a fair and equitable climate regime.

Decisions taken at climate forum will have a strong bearing on the future of the dying nuclear industry, which is leaving no stone unturned in the hope of getting a fresh lease of life. Nuclear installations with lengthy construction period and high capital inputs are declining in popularity in most nuclear nations. In India, only 2.65 per cent of total energy was from nuclear sources in 1999. Globally, 6 per cent of the energy produced in 1998 was from nuclear sources. The higher cost involved has resulted in very few investments in the past, and in the phasing out of existing projects. The US, for instance, has cancelled orders for each new fission plant since 1973 and some operating plants have also been shut down before expiry of licenses as a consequence of poor economics. The International Atomic Energy Agency (IAEA) has recognised that high costs are a barrier particularly for developing countries. But inclusion under CDM will subsidise the capital cost of nuclear plants for developing countries by up to 40 per cent, making it a tempting proposition.(2)

The industry has also been plagued by controversies related to safety, waste disposal management and proliferation of nuclear weapons. Environmentalists fear that an expanded nuclear industry will increase quantities of radioactive waste, and make plutonium, the raw material for nuclear weapons, easily available. The pro-nuclear lobby contends that advanced nuclear energy systems can be developed with minimal safety risk, better management of radioactive waste disposal is possible, and technical and institutional means can be evolved to tackle the proliferation issue. The nuclear industry is hopeful that a positive signal from climate negotiators would project nuclear energy as environmentally benign, and help change public perception. But there is a strong likelihood that truly clean options will take a backseat if nuclear becomes eligible under CDM. So far, considerable amounts of money has been invested in nuclear research with little progress on minimising risks or improving the economics, while renewable energy has struggled on its own and has reported success.

John P. Holdren, member of the White House committee of advisors on science and technology, estimates that about 2800 to 3500 reactors of 1000 electrical megawatt capacity each will be required by 2100 for nuclear energy to make a significant difference to carbon dioxide concentration levels.(3) This means a ten-fold increase in the present nuclear electricity generating system of about 350 reactors of this size.(4) Projections based on present performance suggest that in a world with about 4000 reactors, a mishap of the scale of Three Mile Island accident can be expected every several years.(5) The Three Mile Island Unit-2 reactor in the US operated commercially for just three months before it experienced a core meltdown accident on March 28, 1979. Nearly 150,000 people evacuated the region around the plant until stable conditions were restored. Cleanup after the accident, the worst in the US history, cost more than it took to build the plant.(6)

The temptation to endorse nuclear energy under CDM is strong for industrialised countries. A nuclear power plant uses uranium as fuel, instead of fossil fuels, which release carbon dioxide on combustion. A 700 megawatt (MW) nuclear reactor offsets about 4.5 million tonnes (mt) of carbon dioxide every year, the amount released by a coal fired power plant of same capacity.(7) An eligible technology status accorded to nuclear by CDM would generate huge emissions reduction credits; thereby assisting developed nations to meet their Kyoto targets easily. For instance, just building two 700 MW reactors could help Canada to claim reduction credits equivalent to around 6 per cent of its 1998 carbon dioxide emissions.(8) Such substantial emission credits would attract funds that could have otherwise gone to renewable energy programmes.

Despite this, some European countries with active nuclear energy projects are demanding exclusion of the nuclear option from CDM. Germany, with a substantial nuclear share in overall electricity production, announced at CoP-5 that projects under the mechanisms have to be environmentally effective, sustainable and future oriented (see Table 1). The country is undertaking the fastest ever phase-out of nuclear power by a major industrial country, with the last plant scheduled to close just after year 2020. Belgium, Sweden and Hungary, amongst the top ten countries in the world in terms of reliance on nuclear power, also oppose the inclusion of nuclear under CDM, and are supported by Ireland, Austria, Denmark, Greece, Hungary, Finland, Norway and Italy.(9) "I am of the opinion that the environmental and safety problems surrounding nuclear energy are too important to encourage its proliferation in developing countries under the header of CDM," said Margot Wallstrom, European Union (EU) environment commissioner, while presenting an assessment of CoP-5 to the European parliament in December 1999. Despite opposition from France and the UK, the EU has taken a decision to oppose nuclear technology under CDM.(10)

France and the UK, along with Japan and the US, feel no technology should be expressly advocated or rejected, and oppose the formulation of any list of favoured projects to curtail emissions. "If the US and a few others just say ‘no’ to lists, the EU will have to give in and nuclear will be allowed," says a negotiator favouring nuclear power. Canada is also keen to promote nuclear power.(11) Not surprisingly, these countries, along with their nuclear industries, stand to derive maximum benefits - either through construction of nuclear plants or in terms of huge emission credits - if developing countries install new reactors under CDM.

Meanwhile, some developing countries, particularly those worried about ensuring an equitable distribution of resources from CDM, fear that making nuclear an eligible option would only worsen matters, since countries opting for nuclear would suck a majority of investments leaving others with a fewer projects. Others, such as China and Brazil, who have plans to build more nuclear plants, are interested in seeing nuclear power being included under CDM. China intends to build at least half a dozen new nuclear reactors and is understood to be waiting for nuclear energy to come on board CDM before embarking on these projects. The French government’s nuclear company, Framatome, has already built two reactors in China, and plans to build two more. Two more are being built by Atomic Energy of Canada Ltd. (AECL).(12) Reports indicate that China is seeking to develop a standardized reactor design with western nuclear industries, a decision that will favour the UK-owned Westinghouse, Framatome and Japan’s Mitsubishi.(13)

The nuclear industry has recently changed its strategy, and no longer advocates explicit inclusion of nuclear under CDM. Instead, they oppose any limits on the nature and scope of acceptable projects under the Kyoto mechanisms, to optimize each individual country’s development and energy choices.(14) Convincing the parties to have no explicit list of eligible technologies (ruling nothing in and nothing out) will be enough to serve the purpose of the nuclear lobby. It remains to be seen whether some kind of a consensus is reached on the issue in the climate negotiations at the crucial CoP-6 in The Hague in November this year. 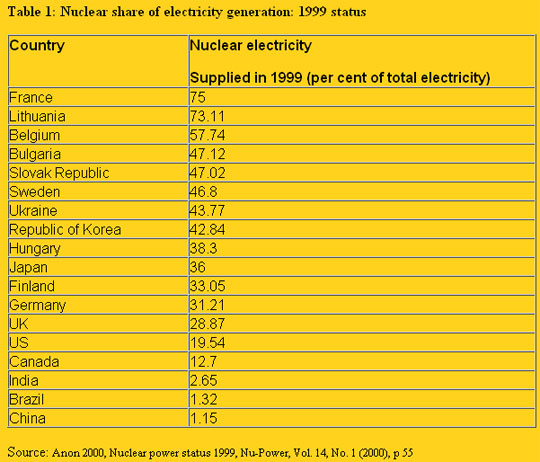 In 1999, 2.65 per cent of India’s energy was derived from nuclear sources.(15) India has a three-stage nuclear power generation programme, building pressurized heavy water reactors (PHWRs) in the first stage using natural uranium as fuel, fast breeder reactors (FBRs) in the second stage using plutonium as fuel and thorium based reactors in the third stage. It first figured on the world nuclear power map when General Electric Co, a US-based company set up two reactors in Tarapur, Maharashtra in 1969. India is well within the second stage now, having developed a fast breeder test reactor. Presently, there are twelve operating nuclear power reactors in India and one unit each at Kaiga and Rajasthan is nearing completion (see Table). When these are commissioned, the installed nuclear capacity will become 2720 electrical megawatt (MWe).(16) Two PHWRs are currently under construction at Tarapur (500MWe) while two units of 220 MWe capacity each are planned for Kaiga in the near future. 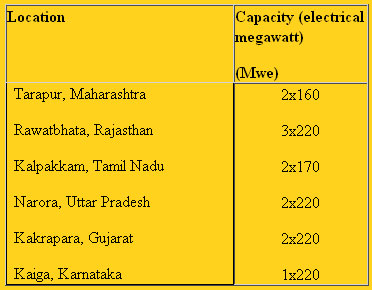