Use of Diesel Generator (DG) sets increases pollution by over 30 per cent in residential societies in Gurugram, finds CSE’s new study

Gurugram, June 26, 2018: CSE released a report titled “GOING SOLAR: Action Plan to Tap Gurugram’s Solar Rooftop Potential 2018” on June 22, 2018. The report revealed that solar rooftops (SRTs) are a clean and cheaper alternative to highly polluting DG sets. Per unit cost of electricity generated by DG is Rs 35 per unit (inclusive of the cost of the DG set), while SRT costs less than Rs 6 per unit.

Findings from another CSE research, “Pollution in residential societies from DG sets” shows that DG sets are most widely used for power back-up during electricity cuts, causing a huge spike in air pollution levels in the local surroundings. The study shows that in societies where DG sets were operated for several hours a day, PM2.5 and PM10 increased by 30% and 50-100% compared to levels before the usage of DG sets. When DG usage exceeded 8 hours, the PM levels were persistently high throughout the day – on an average PM2.5 and PM10 levels were 130 and 300; peak PM2.5 and PM10 levels were 300 and 1900 respectively.

The meeting organized in collaboration with Gurgaon First, a non-profit based in Gurugram

Chandra Bhushan, Deputy Director General, CSE said, “Diesel generator use in societies is causing an alarming increase in pollution levels with spikes of up to 15 times the safe levels. Given that SRT is a clean and economically advantageous alternative and the government itself had announced regulations to promote it, it needs to make concerted efforts to enforce its mandate and encourage installation in residential societies”.

The report further highlighted poor compliance with a 2016 HAREDA order, which mandated the installation of SRT by large industrial, commercial and institutional consumers. However, less than 5 per cent of the 6,200 entities that were required to install rooftop solar systems have complied. CSE’s research found that most agencies such as HUDA, HSIIDC, Town and County Planning have not incorporated the rooftop mandate into their regulations. They have not even communicated the order to the consumers let alone enforce the mandate.

The study estimates that HAREDA regulation translates into approximately 62MW of installation by the current commercial and industrial consumers. “Gurugram’s SRT potential is as high as 800MW based on Gurugram’s Master Plan. The city should target 200 MW of solar rooftop by 2022, which is achievable if solar rooftop is actively promoted to residential societies. ” said Mr Priyavrat Bhati, Programme Director, Energy, CSE.

The study found that high upfront costs, unfamiliarity with system performance and maintenance issues are the major reason for societies’ reluctance to install rooftop systems. The study said that RESCO model, where societies contract with developers to supply rooftop-based power, could address most of these issues and suggested a number of ideas to develop the RESCO market.

For further inquiries please get in touch with Parul Tewari, Media Resource Centre at parul@cseindia.org/9891838367 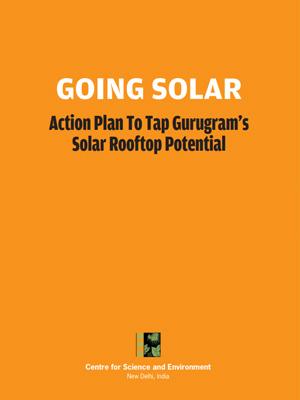