Another crawl for humankind 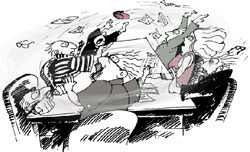 As the east coast of India was battered by the worst cyclone in years, and Cambodia and Vietnam faced the worst flooding in decades, governments from across the world were at a meeting in Bonn, carefully negotiating ways to wriggle out of commitments to control climate change. The two-way street of climate change mitigation -- to control greenhouse gas emissions or not to control greenhouse gas emissions -- has turned into a complicated maze with getaway routes at every turn, despite alarming evidence of climate change around the world, and huge losses to life and property. Minister Pokotoa Sipeli from the tiny island of Niue in the South Pacific was not joking when he told climate negotiators at Bonn, "I sincerely hope that I won't wake up in the middle of the night in the middle of the ocean because you have failed to do your job."

Admittedly, the fifth conference of parties (cop-5) to the United Nations Framework Convention on Climate Change (unfccc) showed none of the desperate horse-trading that marked previous cops. This was partly because no real decisions were to be taken this year, and cop-5 was only meant to pave the way for cop-6 in 2000, which will take decisions on the more polemical aspects of the Kyoto Protocol. But the calm at cop-5 was partially deceptive, as the usual rabble-rousers, a group of industrialised countries led by the us, seemed quieter than usual because they had changed tactics from divisive politics at the cop venue, to targeting the foreign climate change policies of individual countries opposed to their position.